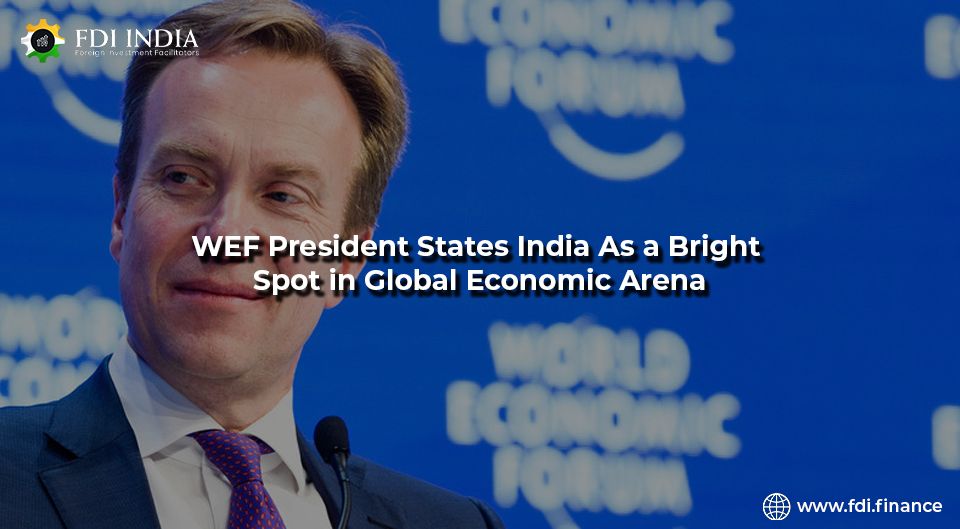 The World Economic Forum, an annual assembly of top business professionals, CEOs and politicians took place in Davos, Switzerland from May 22 to 26. About 3,000 individuals attended the conference from all over the world, including 109 attendees from India. During a panel, Borge Brende, President of the World Economic Forum described India as one of the main drivers of the global economy amid post-Cold-War disruptions and continued turmoil in Ukraine.

He described India as a shining light in the global economic arena as it is set to grow at an even higher pace than the global average in FY 2022-23.

The Indian economy is expected to grow by about 7-8% this year, according to the World Economic Forum; which is a significant increase from last year's 3%. Though there are setbacks in demand and supply chain disruptions globally, faith in India's economic future remains intact.

Borge Brende continued saying, ‘For India, I am a little more optimistic and very bullish- both in the long term and medium term. Despite short-term challenges faced by India and other countries.”

While speaking of India, the WEF President evidently commented that India has such a unique, youthful population. He emphasized the fact that India not only matures its workforce but also begins to compete with US and China when it comes to emerging technologies like artificial intelligence, big data and even cryptocurrency.

India today is a fascinating global investment destination when it comes to business. India has shown a continuous commitment to economic reforms and improvement in the ease of doing business. It allows Foreign Direct Investment (FDI) under the automatic route, and the government undertakes many reforms throughout the year including within various sectors such as insurance, defence, petroleum, natural gas, and telecoms just to name a few.

Although India may not be immune to the adverse effects of Ukraine's War on global supply chains, its fundamentals are strong and resilient. In its latest forecast, the United Nations Conference on Trade and Development (UNCTAD) reduced India's growth for 2022 to 4.6% from earlier estimates of 6.7%. Yet even then, it still remains much higher than the projected world average growth at 2.6% which was also lowered by UNCTAD from an earlier prediction of 3.6%. Although this doesn't sound like good news, nonetheless, India will likely remain a bright spot during times when other countries such as Russia and Western Europe are experiencing serious economic downfalls or slowdowns due to war.