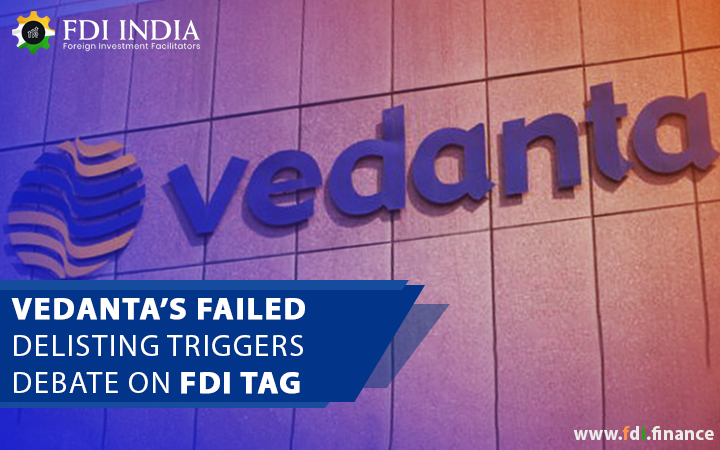 Vedanta group’s failed attempt at delisting an India-listed entity has triggered a debate on the rules that are concerned with the efforts made by a foreign promoter to take an India-listed company private, with some officials questioning the ‘FDI’ tag.

Officials said that the delisting price that is offered by the group, FDI amount of USD 3.15 billion, is very well amounted to about Rs 140 per share. The SEBI regulations gives the shareholder the right to reject any counter offer.

“Vedanta Resources Limited would like to clarify that FDI referred in its press release referred to purchase of shares in an Indian company by VRL, which is a foreign investor. VRL believes that such a secondary purchase of securities is governed by relevant regulations for foreign direct investment in India.”

The group further said, “Delisting process and price discovery process in India is very transparent and investors are free to bid at any price they deem fit. The acquirer has an option to accept the discovered price or make a counter offer at an alternate price, in case the relevant threshold of 90 per cent stake is reached.”

“This would have resulted in FDI (Foreign Direct Investment) inflow of over USD 3.15 billion into the Indian economy and helped boost growth between 0.4 per cent and 0.8 per cent through the multiplier impact of such large infusion of funds.”

Authorities likewise brought up that the achievement or disappointment of the delisting cycle is consistently reliant on the position of the public investors in tolerating or dismissing the cost offered by the advertiser and in this specific case the cost offered was not exactly 50% of what was being normal by the non-advertiser speculators. “We are confident that Vedanta Ltd will continue to grow from strength to strength as a listed entity on the Indian stock exchanges,” it had said.

Shares of Vedanta Ltd had plummeted by more than 20 per cent on Monday after the company’s delisting went from almost-a-success to failure on account of a large number of unconfirmed orders. On Wednesday, the stock dropped 1.25 per cent to close at Rs. 98.4 apiece at the BSE. In a research report that “Vedanta has highlighted that SEBI approved book value of Rs. 89.3/share”.

“It is essentially buying of shares by the promoters. There is no investment coming in the company as such and therefore any reference to the shareholders or the country as a whole losing out on FDI is completely bizarre and inexplicable,” a senior official said.