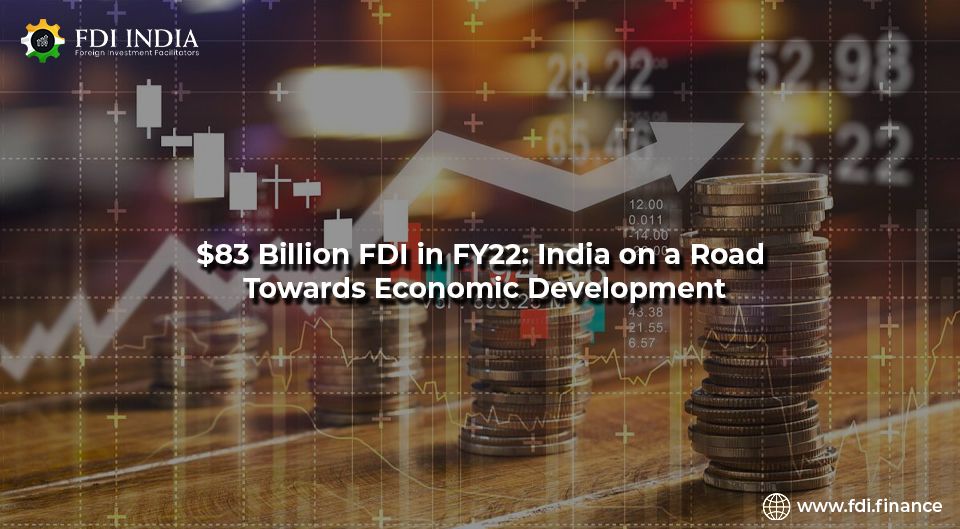 USD 83 Billion FDI in FY22: India on a Road Towards Economic Development

USD 83 Billion FDI in FY22: India on a Road Towards Economic Development

Despite many unknowns and dangers stemming from the COVID epidemic, India remained one of the most attractive destinations for new investors. In 2021, 44% of business leaders in developed countries were planning to invest in India for the first time or add more money to their existing investments, stated Dhiraj Relli, the MD & CEO of HDFC Securities.

Several countries made it known that they considered India an attractive destination due to its domestic market, not just as a waystation for exporting goods. Inflows of gross FDI grew from $82 billion in FY 2021 to $83.6 billion in FY 2022.

Several sectors remained attractive to investors, including IT, pharma, FMCG, financial services, etc. Some of the top countries from where equity inflows were recorded were Singapore ($11.69 billion), the US ($7.52 billion), and Mauritius, among other places such as the UK and Netherlands. India's business-friendly environment and supportive government policy make it easy to do business in the country.

Thanks to the high vaccination rate, recovery programs, and foreign direct investments (FDIs). The investors have gained confidence in India’s market. Also, the nation’s commitment to sustainability is synchronizing with what most investors are looking for in the form of green or transition assets. According to the PHD Chamber of Commerce and Industry (PHDCCI), India is set to draw $100 billion in Foreign Direct Investment (FDI) this year.

FDI is going to play a major role in India's economic future. Not only does it serve as an important non-debt financial resource, but it also acts as a channel for the transfer of technology from leading investors; this will increase the country's competitive advantage globally.

Just as the year 2022 started, the global-giant Google made a $1 billion investment in Indian telco firm Bharti Airtel. This includes an equity investment of $700 million and an additional investment of $300 million for potential future projects in access, networks, and the cloud. It is all part of the India Digitization Fund launched earlier this year to accelerate India’s digital economy.

Deep sector reforms, such as the Prime Minister's GatiShakti initiative, will propel foreign direct investment (FDI) inflows in the future. This is a National Master Plan for Multi-Modal Connectivity where 16 Ministries are coordinating to attract investments in strategic Infrastructure Connectivity Projects. Not only this, but this scheme has supposedly also introduced more than the 26 billion dollars’ worth product linked opportunities that are aimed at promoting foreign and private investor partnerships.

In recent years, the government has been willing to relax FDI restrictions in many areas. Foreign companies investing in India benefit from not only the technical expertise but also lower wages which helps generate employment. With this, quick infrastructure development can happen; which spurs agricultural productivity and increases exports. In general, the foreign direct investment will make countries more competitive and allow them to introduce more products/services boosting the country’s growth.