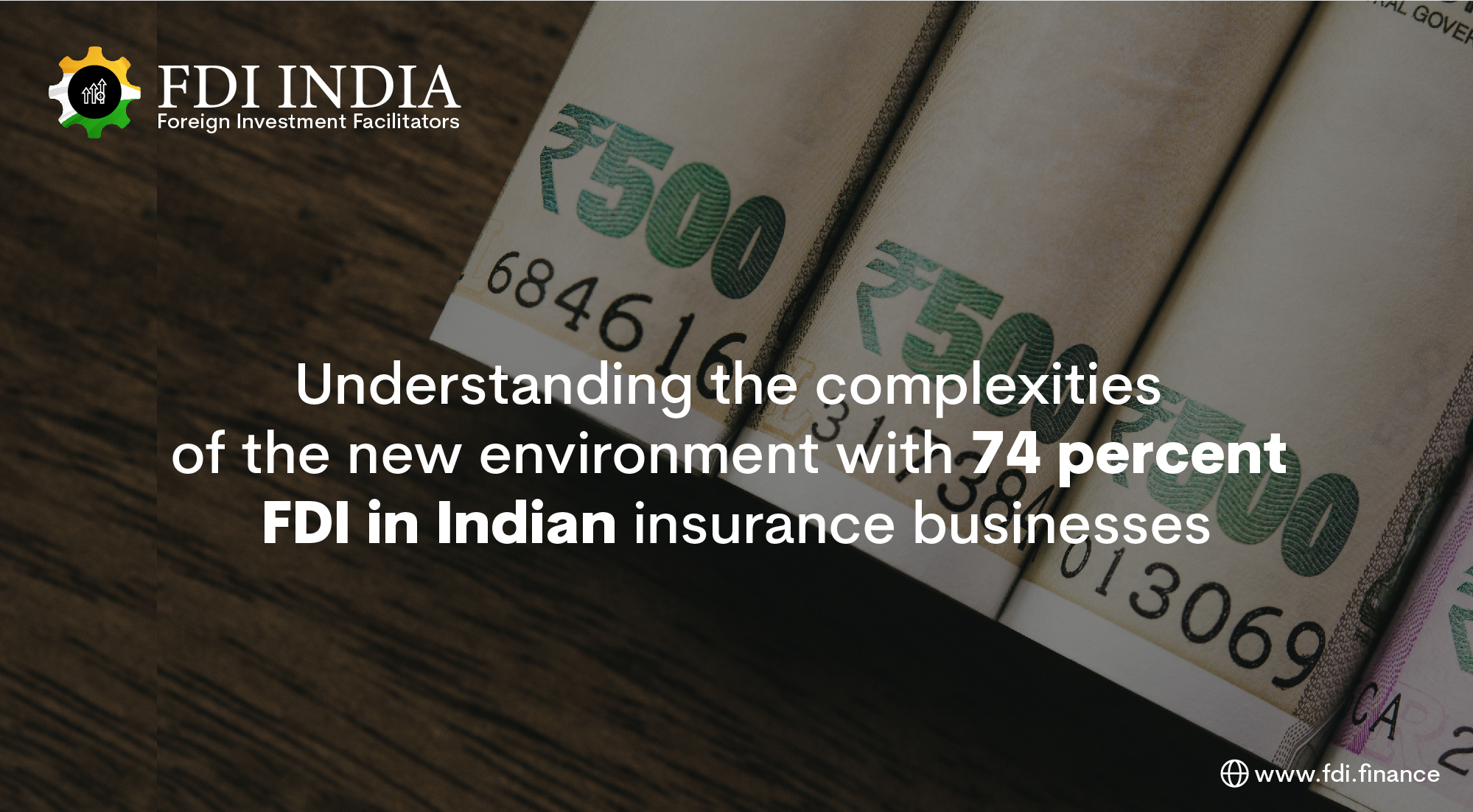 When the government announced in February's Budget that it would raise the FDI cap in Indian insurance businesses from 49 percent to 74 percent, stakeholders across the board applauded the move. Likewise, industry representatives praised the announcement, claiming that it will attract international investors and assist the Indian insurance sector better as more companies learn and adapt from the global know-how and best practices. However, many were concerned that the actual execution of this move on the ground would take a long time, given that several other laws and regulations would need to alter to accommodate the increase in FDI.

With effect from April 1, 2021, the Insurance Act, 1938 (Insurance Act) was amended to remove the statutory requirement that Indian insurance companies be "owned and controlled" by Indian residents and empower the Indian government to impose foreign investment-related conditions through delegated legislation.

Following that, the suggested modifications to the Indian Insurance Companies (Foreign Investment) Rules, 2015, were published. The revisions in their final form have already been announced, and they will take effect on May 19, 2021. The amendment results from a stakeholder consultation process that lasted from April 15 to April 30, 2021. There were no such differences in the amendment sand the drafts.

The Amended Foreign Investment Rules' criteria appear to be following market participants' expectations. However, the new rules include three significant revisions. The first of these will impact all Indian insurance businesses with foreign investment (regardless of the percentage). In contrast, the remaining two will only impact Indian insurance businesses with foreign investment exceeding 49 percent.

1. Directors and key management personnel must reside in the United States (KMPs)

With foreign involvement, Indian insurance companies will now have to verify that:

are "Indian citizens who live in the United States." The new residency criteria for directors and KMPs will take up to a year for Indian insurance companies to comply.

Companies with more than 49 percent foreign investment will now be required to retain at least 50 percent of their net profits as part of their available reserves if they paid a dividend on their equity shares during the relevant financial year. This is because their solvency margin was less than 1.2 times the control level of solvency at any time during the relevant financial year.

3. The number of independent directors has increased.

Companies having a foreign investment of more than 49 percent must now meet the following governance requirements:

(b) Independent directors must make up at least one-third of the board (if the board chairperson is independent).

There were also questions about how far the Indian government would relax the requirement that an Indian insurance company's "ownership and control" be in the hands of Indian people at all times. However, these anxieties have been allayed because no ownership or control limits have been imposed, with the board and KMPs merely having to meet specific citizenship and residency requirements.

The solvency margin of an insurance firm is the minimal amount of assets over liabilities imposed by the regulator. The capital adequacy criteria for banks could be compared. The level of an insurer's capital about all risks it has accepted is known as the solvency ratio, which is a measure of the risk an insurer faces from claims it cannot absorb. The proposed new requirement that at least 50% of net profits be held in general reserve is linked to (a) the solvency margin is less than 1.2 times the control level of solvency and (b) the payment of dividends on equity shares.

A minimum solvency ratio of 150 percent is currently stipulated as the "control level of solvency" for both life and general insurers. Therefore, it will be necessary to determine whether 1.2 times that ratio is a suitable criterion.

However, it is unclear why exclusively domestic insurers should be treated differently on this front, and any controlling shareholder would want the opportunity to pay itself dividends at some point. As a result, new market entrants may consider this in future appraisals.

Note that dividend repatriation requires prior authorization from the regulator, the IRDAI, in the case of foreign investment in insurance intermediaries (where 100 percent foreign investment is permitted). This condition is not included in the updated rules for insurance businesses. However, international investors may have offered the right to issue dividends over these criteria with IRDAI approval as part of the government's consultation process.

The Insurance Act and Foreign Investment Rules stated that Indian insurance companies must be "owned and controlled" by Indian citizens. The IOC (Indian Owned and Controlled) Guidelines, on the other hand, layout the specific governance standards in this regard.

The IOC Guidelines, for example, stipulate that the Indian promoter must designate the majority of non-independent members and that the Indian champion must exert control over critical policies through the Indian promoter-controlled board. Even though they are clearly in conflict with the modified Insurance Act and the updated rules, they remain in effect. As a result, along with notification of the last change to the Foreign Investment Rules, the IRDAI will need to withdraw or revoke the IOC Guidelines formally.

As a next step, the Foreign Exchange Management (Non-Debt Instruments) Rules, 2019 and the Department of Industrial Policy and Promotion's consolidated FDI policy (FDI Policy) will need to be amended, or a clarifying notification in the form of a press note with a similar effect will need to be published.

Given the current rate of development, this may be done very soon.

Two US legislators recently praised India's decision to raise the FDI limit in insurance, claiming that it will boost bilateral trade and investment.

Overall, India's insurance industry is poised to enter a new age of expansion and transformation.