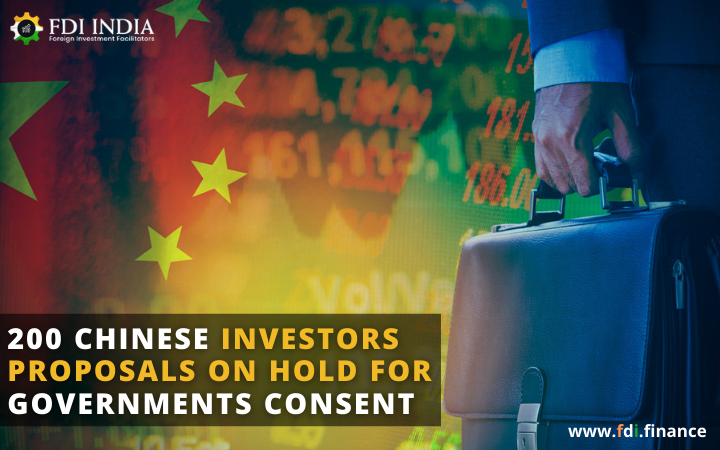 In April, amendments were made in the FDI policies in regard to the neighboring countries and government approval for these investments is made mandatory. After the implementation of the new FDI policies, about 200 Chinese investment proposals are on hold for approval by the Ministry of Home Affairs.

Before the implementation of the new rule, the government’s approval would have not been required to give allowance to the Chinese investment proposals that are now on hold but the government took the strong decision to make amendments due to the ongoing pandemic and border clash with China.

Earlier the approval from the ministry was required only in sectors such as defense, media, telecommunication, satellites, private security agencies, civil aviation, and mining. Also investments from Pakistan and Bangladesh required government’s approval, but now this rule has been set for all the countries with which India shares a border.

The new FDI policy given by The Department for Promotion of Industry and Internal Trade (DPIIT) said “…an entity of a country, which shares a land border with India or where the beneficial owner of investment into India is situated in or is a citizen of any such country, can invest only under the Government route.”

A press statement released by the DPIIT said “curbing opportunistic takeovers/acquisitions of Indian companies due to the current COVID-19 pandemic.”According to a senior government official, 200 applications by Chinese investors are on hold and will be scrutinized by the government before the sanction of the approvals.

The government official said “However, none of the proposals have been cleared so far. These agreements would have been in the pipeline for months and it is possible that many might withdraw due to the delay or stringent conditions put in place now,”

After nearly 4 decades, a border clash between India and China took place amidst the pandemic, in which 20 Indian soldiers were killed in a clash with Chinese soldiers at Galwan Valley. This clash raised a hate wave against China in India and measures are taken by the Indian government such as putting a ban on Chinese applications and amending the FDI policy in response to the border clash.

Recently, Chinese Ambassador Sun Weidong said in a video statement “China has been India’s largest trading partner for many years in a row with cumulative investment in India exceeding $8 billion.”

The other countries that do not share a border with India do not have to take any approval from the government and they would only have to give information to the RBI of the successful transaction.