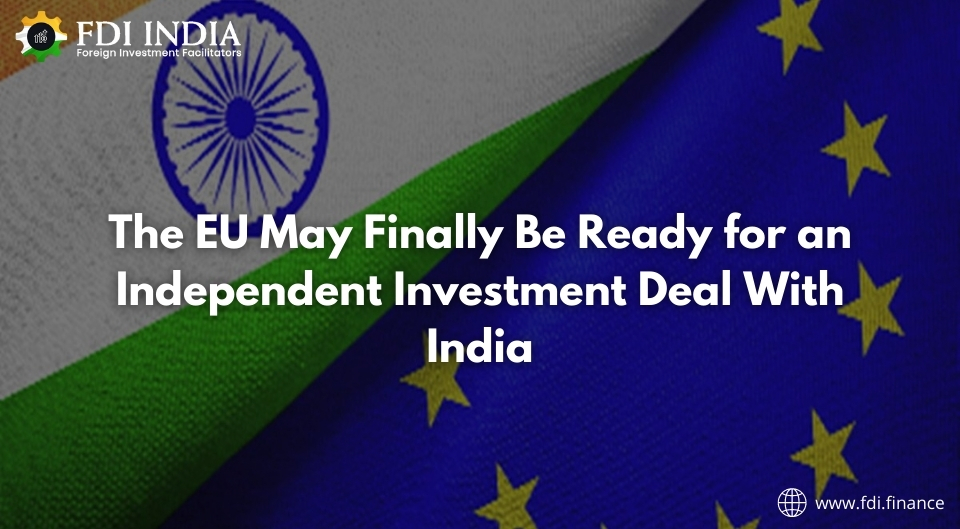 The European Union (EU) has finally granted its approval to a planned investment facilitation agreement with India, which is distinct from the free trade agreement (FTA) that the two countries are simultaneously negotiating.

Until recently, the EU had insisted on both pacts being signed at the same time, a requirement that has hampered the process. According to sources, it has also dragged out negotiations on a more easily concluded investment agreement. New Delhi has pressed for the discussions to be decoupled.

According to reports, India was informed of the recent thaw during the 3rd Strategic Partnership Review meeting on October 19. "The decision to begin talks on a separate investment protection agreement and another agreement to recognise each other's geographical indications was the most significant from a diplomatic standpoint," an official said.

Both parties agreed to begin talks for these two major pacts in May. However, due to the EU's stance of conducting FTA talks at the same time, progress has been sluggish, according to a senior official.

The investment agreement is anticipated to open India up to greater EU FDI while also ensuring that European businesses have legal protection in India. As an example, despite the United Kingdom's departure, EU members the Netherlands and Germany are the fourth and seventh biggest worldwide investors in India, respectively.

However, insiders acknowledge that in the initial few rounds of negotiations, traditional fractures on investment protection may resurface.

Every bilateral investment treaty the Centre has signed with different nations had been cancelled since 2016. New Delhi currently claims that any future investment treaties would be negotiated in accordance with the government's model BIT, which was released in 2015.

However, most of these discussions are not time-bound, and global investors — many of whom are from major investment countries, including EU members — have expressed concern about a legal vacuum.

The EU, like most developed countries, is wary of the BIT since it allows foreign businesses and other aggrieved parties to seek international arbitration only after exhausting local remedies.

“The EU's main issue with the BIT is a provision that states that if an investor-state conflict develops, a foreign investor may only seek international arbitration after exhausting all domestic legal options. While India believes this is necessary to keep litigation under control and minimise the risk of exorbitant fines from foreign courts, the EU considers India's judicial system to be sluggish and corrupt, according to a top Delhi-based trade specialist.

The BIT, on the other hand, guarantees that dispute-resolution tribunals, including foreign tribunals, may challenge 'public purpose' and revisit a legal matter decided by Indian judicial authorities.

It further says that India or any other country cannot nationalise or expropriate any foreign company's assets unless the law is obeyed, the action is carried out for a public good, and appropriate compensation is given. Any pact India has signed with foreign countries does not specify the public aim.

Both parties, on the other hand, have agreed to go ahead with the FTA discussions, which are scheduled to begin soon after an eight-year hiatus.

They've determined that the introductory lectures would be based on early industry suggestions. The Trade Policy Council of India and the Confederation of Indian Industry, for example, have both said that the agreement would benefit the nation.

India had reached out to the EU in early 2020, before the worldwide COVID-19 epidemic shifted priorities, to resume the stalled negotiations, signalling its readiness to cut tariffs on wines and cars.

After declining to join the planned Regional Comprehensive Economic Partnership (RCEP) in November 2019, New Delhi was eager to sign the agreement.

The trade discussions began in 2007 and lasted until 2013, with 16 official rounds of talks. However, they struck a brick block in 2016 when India chose to end existing bilateral investment accords with 23 European nations.