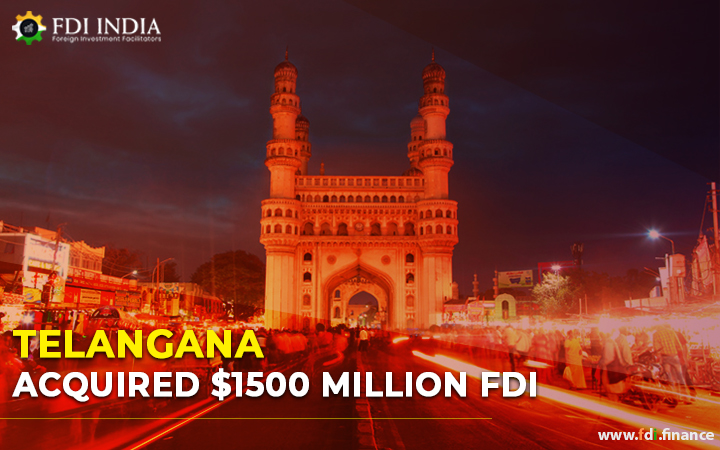 Despite Covid-19 lockdown and lockdown guidelines imposed in the months later, Telangana continues to captivate FDI. The state ranked eighth in the FDI chart by acquiring $1516 million FDI from October 2019 to December 2020. Another compensatory attribute was some organizations in electronic manufacturing are shifting their base from China to India, a fact stated by the state’s industries minister KT Rama Rao. He mentioned that Telangana had been emphasized on opening up organizations who are looking forward to moving out of China after the repercussions of the pandemic. The neighboring Andhra Pradesh was at the 13th position with $265 million, while Maharashtra was at the top with $19,865 million followed by Karnataka at $ 9,706 million. A total FDI inflow was Rs, 67,736 crores in the country. According to the report of the Union Minister for Commerce and Industry, besides Delhi and Gujrat, Jharkhand was also part of the league by captivating FDI OF $2,643 million. Tamil Nadu and Haryana were also succeeded in attracting FDI.

Union Minister of Commerce and Industry Som Prakash mentioned that various steps like production-linked investment scheme, GIS mapping of the land bank and Insurance of quality control to decrease substandard import is placed to captivate further investment in the country. Around 14 organizations electronic design manufacturing domain have transformed their production base from China to India. However, there are many companies which have recommended their plan and shown interest to shift. Employment of 31,509 workforces is likely to increase’ Som Prakash mentioned. The government of India has established a high -level to authorize a group of secretaries and project development cell in ministries and departments with a vision to cater support and encouragement to the investor to invest in India. Experts stated that both Telangana and Andhra Pradesh government should enhance the foreign investor confidence by following Karnataka. Officials mentioned that attempts are being made to captivate organizations from textile, electronic and life science from China to create employment. Suresh Reddy mentioned, Telangana is flourishing in the Information Technology domain. The government should take initiative to promote FDI.