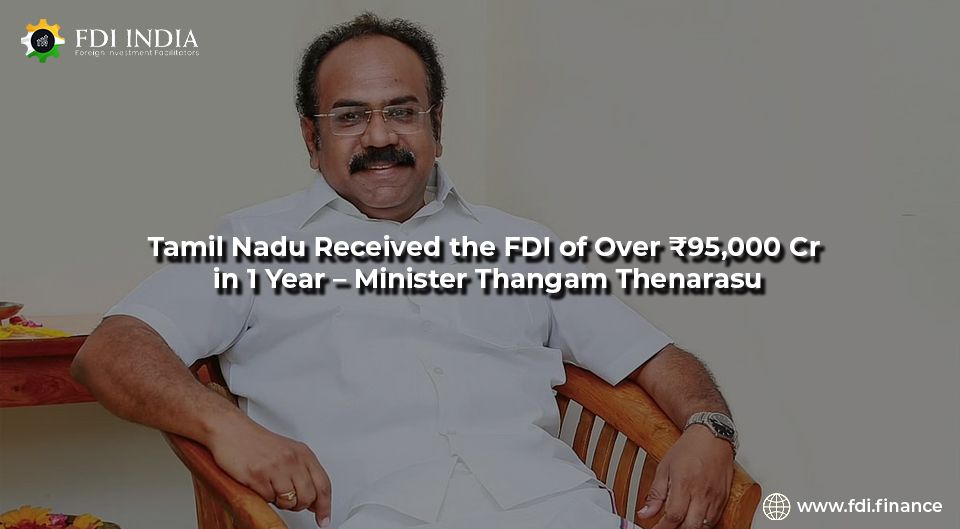 The state of Tamil Nadu has been a very successful one for foreign-based companies wishing to invest in the country. Recent data shows that Tamil Nadu has signed memorandums with 132 international companies who added together, will bring FDI of more than ?95,000 crores into the state and generate employment for more than 2 lakh (200,000) citizens, said the minister of Industries Thangam Thenarasu countering the governor’s criticism.

He also said his state ranked third in the Ease of Doing Business. Speaking to reporters at the state secretariat, he rejected governor R N Ravi's statement that Tamil Nadu is bringing in more investment than neighboring states but not as much as Maharashtra and Karnataka.

IGSS Ventures, a Singapore-based company, announced on Friday that it plans to build a ?25,600 crore-worth semiconductor high-tech park. With this project, the total amount of FDI accumulated through MoUs signed by the government since taking office in 2021 has risen to $94,975 crore and will be able to create 2.26 lakh jobs for local people.

Chief Minister M K Stalin will also host an investors’ conclave on July 4 during which 60 MoUs will be signed with companies. At the conclave, Stalin will lay the foundation stone for 21 new projects and inaugurate 12 completed ones. We held our first Investors’ Conclave in 2021 after the second wave of COVID-19 took place and yet investors showed interest in coming to Tamil Nadu despite there being so many things happening all over the world during that time, this surely gives a sigh of relief and shows the interest of business to come and work in Tamil Nadu, said Thenarasu.

Out of 132 MOUs that were made, 29 factories have been found for these new industries so far. With more than 25 businesses still in the planning phase, there has been a variety of sector-specific investments made - most notably those pertaining to artificial intelligence and research and development.

Minister also clarified further speculation of the people in relation to the closure of Vedanta’s Sterlite Copper Plant located in Thoothukudi that is being said to have taken a toll on foreign direct investment (FDI) inflow of the state. He said that all the above investments were made after the plant was closed and even new investments have been attracted to the Thoothukudi district.