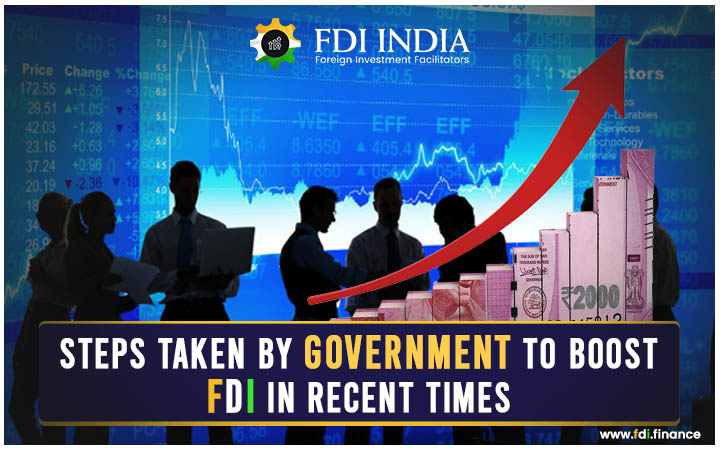 Steps Taken by Government to Boost FDI in Recent Times

Steps Taken by Government to Boost FDI in Recent Times

Today, India is one of the most attractive destinations for foreign direct investments. As per data released by the Department for Promotion of Industry and Internal Trade (DPIIT), FDI in India stood at US$ 456.79 billion during April 2000 to December 2019.

For the fiscal year 2019-20 , data indicated that the country’s service sector attracted the highest FDI equity inflow of US$ 6.52 billion, followed by computer software and hardware – US$ 6.34 billion, telecommunications sector - US$ 4.29 billion and trading – US$ 3.52 billion.

Some recent steps taken by the government to boost economy are outlined below:

In the month of March 2020, the government of India allowed non-resident Indians (NRIs) to acquire up to 100 per cent stake in Air India.

Last year in August, the government permitted 100 per cent FDI under the automatic route in coal mining for open sale (as well as in developing allied infrastructure like washeries).

Apart from this, 100 per cent foreign direct investment was also permitted for insurance intermediaries.