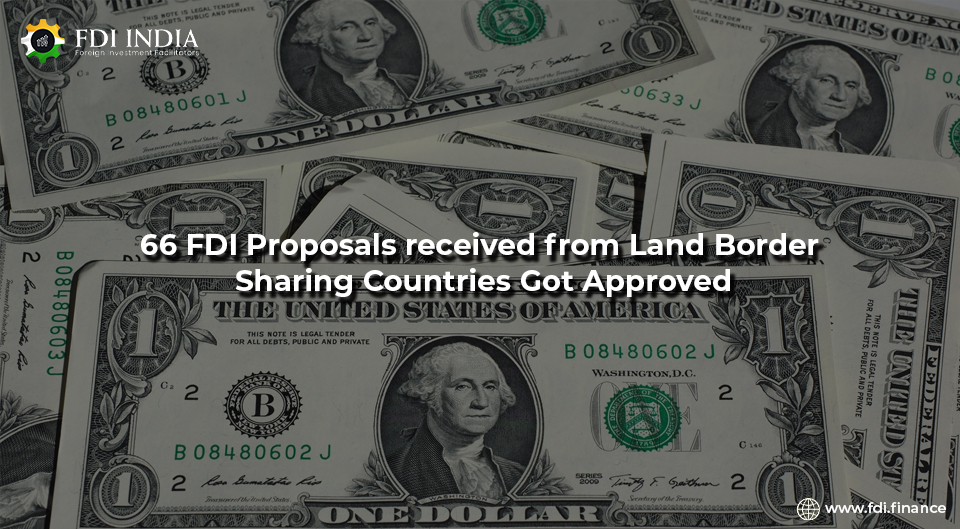 The Indian government has received about 347 foreign direct investment (FDI) proposals worth Rs. 75,951 crore from the countries that have been sharing a land border with India since April 18, 2020. Parliament was informed on Wednesday about this. However, only 66 out of 347 proposals have been approved by the government, and 193 cases have been rejected or withdrawn, said by Minister of State for Commerce and Industry Som Prakash in a written reply to Lok Sabha.

"Since April 18, 2020 till now, 347 FDI proposals have been received by the Indian government from the countries which are sharing border with India or where the beneficial owner of an investment into India is situated in or is a citizen of any such country. The value of the investments proposed in the aforementioned proposals received by the government is approximately Rs. 75,951 crore," he said.

Countries that share land borders with India are China, Bangladesh, Pakistan, Bhutan, Nepal, Myanmar and Afghanistan. As per the decision, these countries need government approval for their FDI proposals for any sector they want to invest in.

The total value of investments of these 66 proposals aggregated to Rs 13,624.88 crore.

In another reply, Prakash said a decision had been taken to develop a data exchange platform among all operators' modes. The government has taken this step to avoid any potential escalation of conflict with neighbouring countries.

The government is not imposing any new restrictions on foreign investments. It only makes prior approval mandatory for investments from countries that share the land with India.