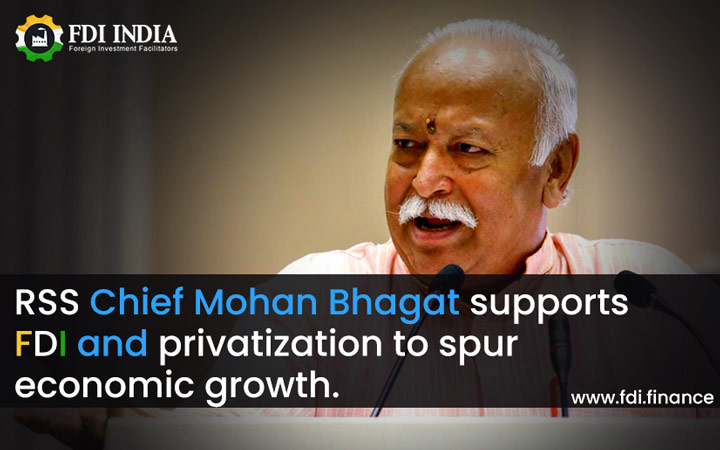 In a first, Mohan Bhagat, Chief of RSS for the first time voiced his support for the government’s decision to encourage more foreign direct investment or FDI and privatization in order to support the sinking economy. This made it to the news because this support does not align with RSS’ traditional stance.

Bhagat, during his yearly Vijayadashami speech in Nagpur said, “To strengthen the economy, the government is compelled to take steps such as allowing Foreign Direct Investment and disinvestment of industries.”

He warned that foreign direct investment, globalization, and privatization are only beneficial if they are done keeping India’s needs in mind.

Mohan Bhagat’s remarks come as a surprise given RSS’ ancient views of maintaining a self-dependent economy. The organization is known to have traditional views when it comes to foreign direct investment in India. The Swadeshi Jagran Manch and Bhartiya Mazdoor Sangh, both affiliated with RSS have openly showed their stance against foreign direct investment with protests.

This time, however, Bhagat linked his new stance to a new definition of Swedeshi. He said, “Swadeshi is someone who lives in a globalised economy but only on conditions that favor India. If something can be produced in my country, why will I buy it from any other place and thus ruin my domestic trade?”

He also said that a Swedeshi will only buy a commodity from outside the country if it is an absolute necessity. He further said that during these times we cannot afford to have a closed economy.