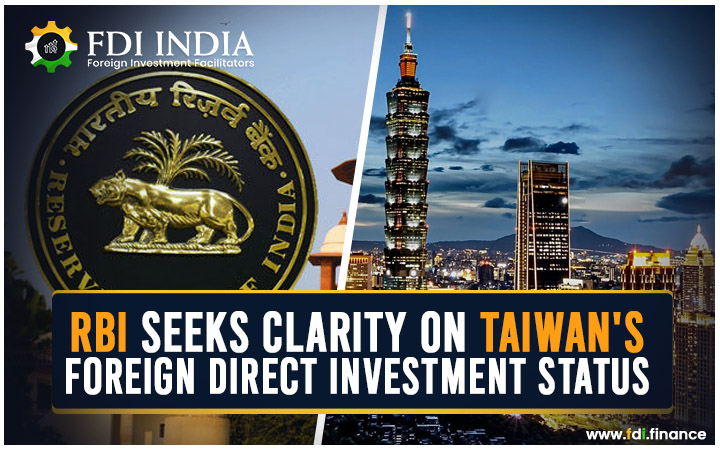 The Reserve Bank of India (RBI) has sought clarity from the government on whether investments from Taiwan would require government approval for foreign direct investment (FDI).

It is to bee seen if foreign investments from Taiwan, which until recently was considered a part of China, will face the same governmental scrutiny before being permitted to invest in India. As per the recent amendment made to the foreign direct investment policy of India, foreign equity inflows coming from countries sharing a border with India will have to get a prior approval from the government.

So far, Taiwan has made small investments into the country, amounting to less than 1 per cent in the past two decades, which has not made it a factor in the government’s calculations. The government is currently considering whether it should categorise investments from Taiwan as automatic while subjecting those from the mainland to government approval said sources.

According to sources, Hong Kong will be considered a separate entity from China and investments from there will be under the automatic route. This is unlike to cause problems or political drama as China itself considers Hong Kong as part of “one country two systems.”

The case of Taiwan, however, is different. Politically, Taiwan is considered a part of China while from the commerce point of view, New Delhi treats it as a special entity.

Barring a few countries, others, including the United States view Taiwan as a separate country and do business with it as a sovereign nation.