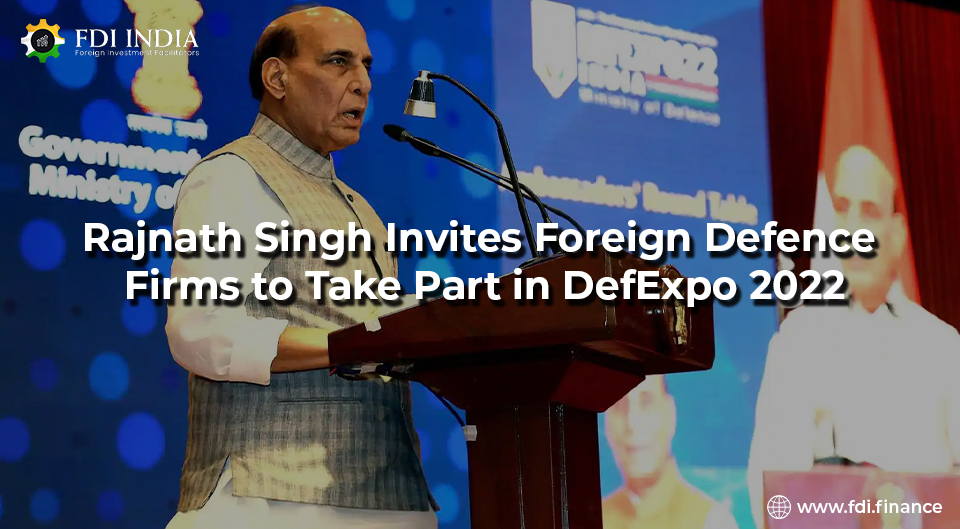 Defence Minister Rajnath Singh attended a roundtable of ambassadors from friendly foreign nations on Monday, inviting worldwide defence corporations to participate in DefExpo 2022, Asia's biggest defence expo, which will be held in Gandhinagar from March 10 to 13, 2022.

"More than 200 participants attended the roundtable, including ambassadors, chiefs of missions, and defence attachés, highlighting the rising global interest in India's defence space," the defence ministry said in a statement. The minister informed the delegates on the exhibition's planning, arrangements, and other aspects.

The emphasis of India's major military show is on positioning the nation as a growing defence manufacturing powerhouse, which is one of the government's key ambitions in the industry. Singh expressed confidence that DefExpo 2022 would bring all of the newest technology together under one roof, providing a plethora of opportunity for all parties.

"A resurgent India, where defence manufacturing has been regarded as a key driver of development, will demonstrate its potential to lead at DefExpo 2022." It will plant the seeds of successful new ventures and international partnerships to promote shared prosperity, increase investment, expand manufacturing, and strengthen India's aerospace and defence ecosystem, which will be ready to serve the defence needs of our friendly countries as well," the minister said.

The event takes place at a time when the government is focusing more on boosting self-sufficiency in the defence industrial sector and establishing itself as a military gear exporter.

DefExpo was typically hosted in Delhi until 2014, when it was moved to Goa (2016), Chennai (2018), and Lucknow (2019). (2020). When Manohar Parrikar was the defence minister, the location was transferred to Goa, then to Chennai when Nirmala Sitharaman was in charge, and finally to Lucknow when Rajnath Singh was in charge.

Over the last two years, the government has taken a number of steps to increase self-reliance in the defence sector, including increasing foreign direct investment (FDI) in defence manufacturing, creating a separate budget for buying locally-made military hardware, and notifying two lists of weapons and equipment that cannot be imported.

Officials acquainted with the situation claimed that Defence Minister Rajnath Singh conducted a surprise visit of the defence ministry's offices in South Block on Monday. According to them, he went to numerous offices and evaluated the cleanliness, work environment, file care, and talked with the personnel. Wherever there was a need for improvement, the minister gave the required directives. He also said that digitalization of documents and information is the way to go in the future.