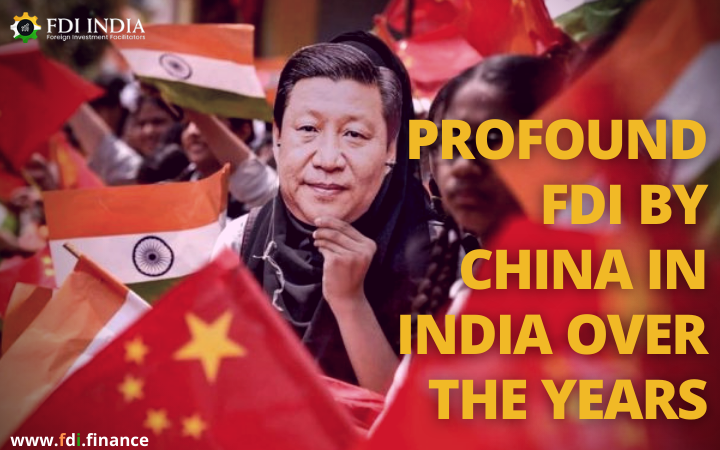 Profound FDI by China in India Over the Years

Profound FDI by China in India Over the Years

Major investments have been done by China in India through Foreign Direct Investment into various sectors. Around $ 6.2 billion has been invested by China in innumerable Indian sectors.

The sectors in which China has invested money in India are startups, tech companies, applications, and smart phones. The Government of India’s FAME scheme has been quite rewarding for BYD Motors that is a Chinese Auto company that renders electronic buses to state governments.

Companies such as Xiaomi, Oppo, Vivo, and Huawei have established their manufacturing plants in areas like Tamil Nadu, Greater Noida, and Andhra Pradesh. These companies have been successful in gaining 100?I in contract manufacturing in India, data given by the Ministry of Corporate Affair’s “Invest India Data”.

During 2015-2019, China had invested in more than 88 projects and these investments were done majorly in the electronics and the IT sector. Through The Foreign Investment Monitor of The Financial times, it was calculated that in 2019 itself, China did investment in 19 projects in IT and Electronics sector.

The companies that have developed at a face rate in India are the automobile companies such as MG motors, BYD auto, Colsight, YAPP Automobiles of China. India’s startups have been on a rise since a few years and they have attracted huge investments by Alibaba group, Tencent, Steadview Capital, and Didi Chuxing.

In the Unicorn Companies in India, there is Chinese Funding amounting to $3,500 million. Zomato has been running successfully in India and the amount of funding Alibaba group has done is of more than $200 million in it.

Similarly, Alibaba group has done the funding of above $200 million in Big Basket which is a well-performing Indian startup. The investments done by Tencent Holding are in Byju's amount to $50 million and in partnership with Steadview Capital, the companies have invested more than $500 million in Ola.

Paytm and Paytm Mall which is the most used digital payment provider in India has the share of Alibaba Group amounting to investments of more than $550 million. It has been observed by Gateway House (a foreign policy think tank) that all the startups of India which have the value of over $1 billion have foreign investments.

China has been gaining profits through the Indian Tech startups due to the dependence of these startups on overseas venture capital (VC) funding. The major dominance of China is in the Indian smart phone market with a share of 70%

Dominating the top positions in the smart phone market are Vivo, Oppo, Oneplus, Xiaomi, and Realme. They have been very popular in the Indian market as the consumers got better technology and features at the best price.

The market share of Vivo and Oppo was 15-17% and Xiaomi had a 27-28% share in the smart phone market in 2019. Even in applications, China dominates the market in India as all the top application downloads were of Chinese applications like Tiktok, Vigo Video, ShareIt, Cam Scanner, and many more.

All these applications are of the companies that have the majority of Chinese investments. China has also diversified its investments in the optical fiber sector through high investments done by Chinese companies such as Fiberhome, ZIT, TG Advait, and Hengtong.

To further accelerate the dominance of China in technology, the Indian government had given sanctions to Huawei, which is a Tech Giant for executing 5G trials in the country.

There is a lot of tension on the Indo-China border and the Government of India took a tough stand when 20 Indian soldiers got killed in a duel with Chinese PLA. After the incident, there will be a re-evaluation of the Chinese stakes in Indian sectors as said by the Ministry of Commerce and Government of India.

A statement by a source in the Ministry of Commerce said “We will be re-looking into Chinese investments in India and we have noticed that most of these companies that have invested in India have put influential people like lawyers, next of kin of judges, and politicians into their board of directors so that no harm is done to them. All these factors will be looked into.”

India needs to consider the number of investments done by China as the dominance of its investments is deeply rooted in the Indian economy. Reforms in the FDI policies are required as there is a high share of investment of China in Indian companies.

India is yet to develop a platform like Google and talking about Jio which is a company of Reliance Industry, they are in the process of recreating the Alibaba's model in the Indian market.