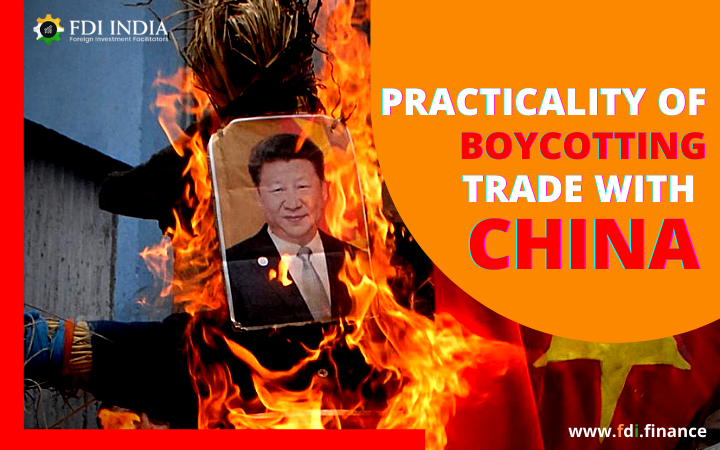 Practicality of Boycotting Trade with China

Practicality of Boycotting Trade with China

Is it really possible for India to ban the use of Chinese products and investments? There has been a nationwide cry to ban the products that are made in China after the clash between the Indian and Chinese soldiers on the border.

A bloody clash recently took place between the Indian Army and the People's Liberation Army (PLA) at the LAC (Line of Actual Control). After the incident took place, there was a series of rage in the Indian citizens to ban the use of Chinese products and according to the Times Social media team, there had been approximately 47,000 mentions on the hash tag #BoycottChina and 2,31,000 mentions on the hash tag #BoycottChineseProducts on the micro blogging platform --Twitter-- between May 28 and June 1, 2020.

It is really important to understand that whether it is really possible to cut all economic ties with China and the results this decision might have on the economy of India. Understanding all the statistics is vital to know the reality of the situation in which India is in today.

Chinese investments have been on a rise in the private sector companies of India and they have major stakes in the Indian startup market also. Gateway house published a report in March 2020 that states, all of the prominent Indian companies have huge investments from China.

Over $3,600 million of investment has been done by the Venture Capitalist and Technology Companies of China in India.

The report by Gateway House further states "Indian VC financiers are wealthy individuals or family offices – and cannot make the $100-million commitments needed to finance start-ups through their early losses."

In the report, it is also mentioned that "For instance, Paytm incurred a loss of Rs 3,690 crore in FY19 while Flipkart lost Rs 3,837 crore over the year, which leaves western and Chinese investors as dominant players in the Indian start-up space,"

“E-tail and the allied sectors, like logistics, warehousing, IT/ITeS” are expected to create direct employment for around 1.45 million people by 2021", this statement was published in a report by KPMG in 2018.

Due to the pandemic, there is an increase in the online delivery services and increment in the loss in the economy if the Chinese investors take their investments away then it would be terrifying for the Indian companies with a high stake of China.

Chinese investors have high stakes in the technology sector of India. The Chinese applications have 50% dominance in the application downloads in India including web browsers, data sharing, and social media apps.

A Chinese browser in October 2019 had a sizeable market share of 17.09% in the mobile browser market space and it also led the mobile phone segment in India with 21.38% market share".

In the streaming services that are used widely, there are also Chinese investments in this sector like the applications that are used for listening to songs and to view the online content on the OTT platforms.

Through all the reports it can be understood that China has grown significantly in the technology sector in India.

Earlier in August 1991 to December 2005 the FDI from China in India was only 0.01%, which is US$ 2.91 million of the total FDI into India by the report of Indian governments' department for the promotion of Industry and International Trade.

The trade balance between India and China is in negative $184,000.33 million in 2018-19. The trade deficit with China is at USD 53.56 billion in 2018-19, according to a report by MVIRDC (Visvesvaraya Industrial Research and Development Centre) World Trade Centre Mumbai, in Jan 2020, published in CMIE (Centre for Monitoring Indian Economy Pvt. Ltd.)

The report further states the 20 products that are amounting to the US $ 82 billion to China, which will be able to aid India for the reduction of the trade deficit between the two countries and will be enhancing the Indian market share in China in regard to these products.

There are many questions that are yet to answered by the Indian government that will be letting go of the opportunity to trade those products with China due to the ongoing boycott of China and the level of preparedness of India to combat against the trade deficit.

The practicality and the emotion of the nation against the dual on the border are required to be thought through to emerge well from the ongoing situations.