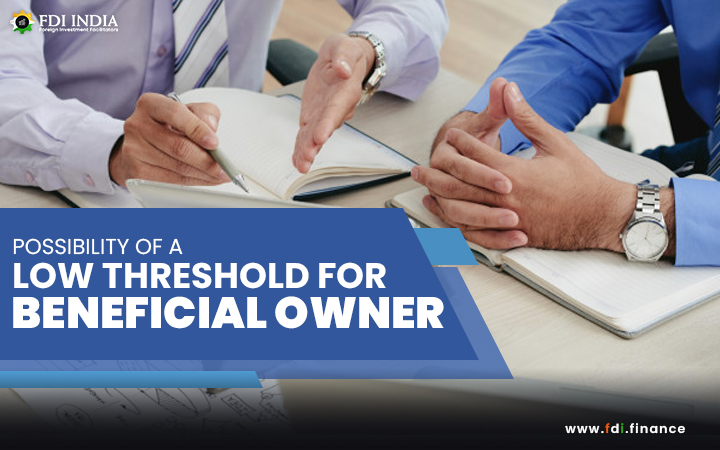 Possibility of a Low Threshold for Beneficial Owner

Possibility of a Low Threshold for Beneficial Owner

There is a possibility that Indian might authorize a low threshold for beneficial ownership in the foreign direct investment (FDI) policy. The recent amendments that have been done in the FDI policy are that the neighboring countries of India would be requiring prior consent from the government for making investments.

A 25% and 10% limit has been set by the policymakers but there are chances that the lower limit might be selected by them. The officials have said that the final decision will be made at the highest level of government.

In the definition of beneficial ownership in the companies act the 10% limit is set. Discussions with the stakeholders and inter-ministerial discussions have already been carried out by the Department for Promotion of Industry and Internal Trade (DPIIT).

For the finalization of the proposal, cabinet approval will be taken as per a government official.

If the lower limit gets set then the small and financial investments will not be facing any scrutiny, significant investments from China and other countries will have to undergo checking.

This means that the projects of small amounts will also require government approvals. In this, the investments made by the venture capitalist and private equity investments will be covered if their funds have Chinese participation. The benefit of the beneficial ownership threshold will be that it will give exemption to the investments from scrutiny.

Investors are heavily relying on the definitions for beneficial ownership that is mentioned in the other Acts. In the Companies Act, it is mentioned that beneficial owner as an entity that holds indirectly, or together with any direct holding, not less than 10% of the shares/voting rights in shares or has a right to exercise significant influence/control in any other manner than direct holding.

In the Prevention of Money Laundering Act (PMLA), it is mentioned that controlling ownership interest in a company of more than 2% of shares and 15% in the case of a partnership.

The Department of Expenditure released an order on 24th July 2020, in which restrictions have been imposed on bidders for government procurement fixed beneficial ownership at a 25% threshold.

In the press note issued on 18th April, 2020the DPIIT has said that the FDI policy review aims at "curbing opportunistic takeovers/acquisitions of Indian companies due to the current COVID-19 pandemic".