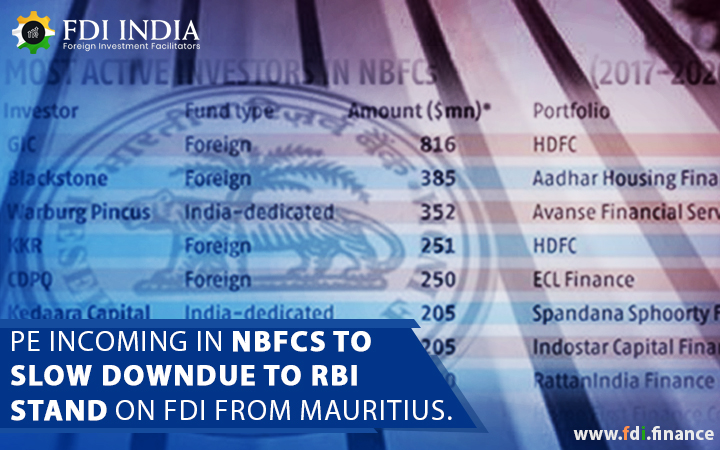 Establishments of the financial firms with Foreign Direct Investment (FDI) from Mauritius and other authority which fails to match the standards allocated by the Financial Action Task Force (FATF) is anticipated to reduce the investment of Private Equity (PE) in Non-Banking Financial Companies (NBFCs) as stated by The Reserve Bank of India in its new statement.

The financial organizations controlled by RBI will have to withstand its note limiting Chinese investments and adoption of FATF-standards which will govern the investments approval, Sivanandh said. And as consequences about $1-1.5 billion of annual incoming into NBFCs would be affected.

“There are so many entrepreneurs who are dependent on this, who will be shattered with a last-minute change in policy,” said Renuka Ramnath, chief executive and managing director at Multiples Asset Management. A letter on this affair has been sent by Indian Private Equity and Venture Capital Association (IVCA) to RBI. “Given the timing with Covid-19 and the lockdown, the NBFC sector was especially in need of capital,” said Siddarth Pai, co-chair, regulatory affairs committee at IV­CA and founding partner at 3one4 Capital. “Because of this issue, many NBFC licences ha­ve been held up and NBFCs are not able to raise new funds,” he added.

According to Pai the existing investments will not be impacted as they are designed to be exempted. He further added that since Mauritius was in the FATF grey-list this year hence these arrangements were trending. A circular has been issued on the subject matter by both securities and exchange Board of India (Sebi) and RBI. While Sebi permitted the investment of the funds dwelling in Mauritius into the Indian market, RBI took a restricting stand. Pai said. “So, all new investments into RBI-regulated entities (particularly NBFCs) will face this additional test. This would seem to be regardless of whether the investor is an existing or a new investor in the NBFC,” he said. Since the organizations such as Blackstone, Brook­field Asset Manage­ment, KKR India Financial Services does not deals with investments from Mauritius hence the credit operations of such giant Private Equity will not be impacted, said a senior analyst.

The spokesperson of Black­stone disclaimed any effect on its credit operations due to RBI stands. A KKR India Financial Services spokesperson when contacted also confirmed that the firm would not be impacted.

An official from a PE fund said there was no indication by the RBI that it was intent on governing investments retrospectively. The official said existing investors in the financial space will wait out their exit timelines. The foreign investment facilitation portal that approves investments in sectors that require government nod needs security clearance from the Union home mi­nistry. This might not be forth­coming now, as the FATF added Mauritius to its grey listed in February for not meeting its standards for compliance with anti-money laundering rules.

Since India is a member of FATF the officials said that the RBI’s move was expected. There is uncertainty since the RBI position has not been issued as a directive or a circular, so participants are guided by Para 55 of the RBI Master KYC directions that do not preclude “regulated entities from having legitimate trade and business transactions with the countries and jurisdictions mentioned in the FATF statement,” said Sivanandh.

However, RBI still has the power to apply these directions in the manner it deems fit to counter money-laundering and terror financing, he said.

In May, IVCA had written to the RBI seeking clarity on its licensing policy for NBFCs. The RBI has replied saying that finance companies cannot be set up with FDI from jurisdictions that do not meet FATF benchmarks.