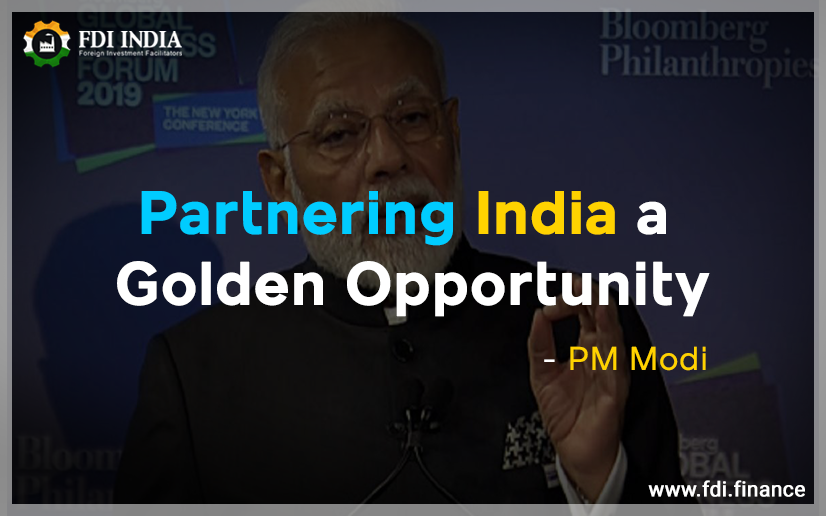 At the Bloomberg Global Business Forum in New York, Modi while speaking on ‘Restoring Global Stability’ said that the economy of India has added $1 trillion over the past 5 years and further plans to become a $5 trillion giant.

“We are determined to reach $5 trillion. We have the capability and conditions with us”, he said.

The Prime Minister also added that the latest cut in corporate tax was “revolutionary for investment” and also promised more reforms.

“This is just the beginning, there’s more to come. It’s a golden opportunity to partner India … The government of India respects wealth creation,” Modi said as he spoke to an audience that included the former US President Bill Clinton, former IMF chief Christine Lagarde and the CEOs of several Fortune 500 companies.

PM said that India was the right destination for real estate investors with the country heavily investing in infrastructure.

“In the coming years, we will spend around $1.3 trillion on modernizing infrastructure … Our people are moving up the economic ladder. Our middle class is a huge segment that has a global outlook,” he said.

He also invited defence manufacturers to invest in the sector in India. “We have opened our defence sector like never before. If you want to make in India, for India and the world, come to India. No Indian government has invested in infrastructure as we have”, Modi said.

Modi also talked about how India wants to move towards organic farming and said that the country can become the world’s food basket.

Recently the government introduced several reforms in foreign direct investment across various sectors such as digital media, coal mining, contract manufacturing, and single brand retail trade. The government with these new reforms hopes to encourage foreign investors to invest into the country.