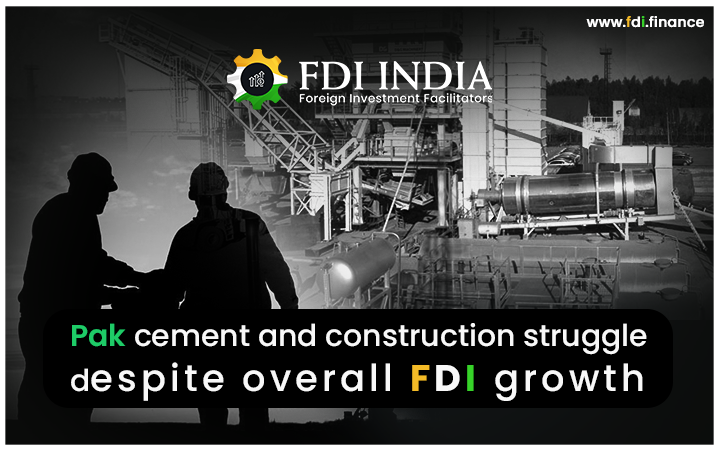 According to the data released by the State Bank of Pakistan (SBP) on foreign direct investment equity inflows or February 2020 and eight months of the current fiscal year of 2019-20, the country has been a recipient of USD 2.24 billion against USD 2.36 billion in the corresponding July-February period of the last fiscal year of 2018-19.

The FDI equity inflows amounted to USD 332.5 million in Feb 2020 as compared to the USD 179.1 million in the corresponding month of last year.

However, net FDI inflows were worth USD 1.85 billion is the period between July and Feb as compared to USD 1.06 billion in the corresponding period of the last financial year.

Although, this increasing trend in foreign direct investments did not reflect in the country’s construction and cement industries, which still lag behind other industries.

Pakistan's cement and construction sectors recorded a decrease in net FDI equity inflows of 88.9 per cent to USD 36.4 mn in the 8MFY19-20, compared to USD 327.4 mn in the same period from the last fiscal year. Out of this total, the cement industry attracted an investment of USD 25.8 mn and the construction sector USD 10.6 mn, compared to USD 32.4 mn and USD 295 mn, respectively in year-ago period. This represents a decline of 20.4 per cent and 96.4 per cent in the cement and construction sectors, respectively. In February 2020 alone, both sectors attracted a total net FDI of only USD 4 mn.