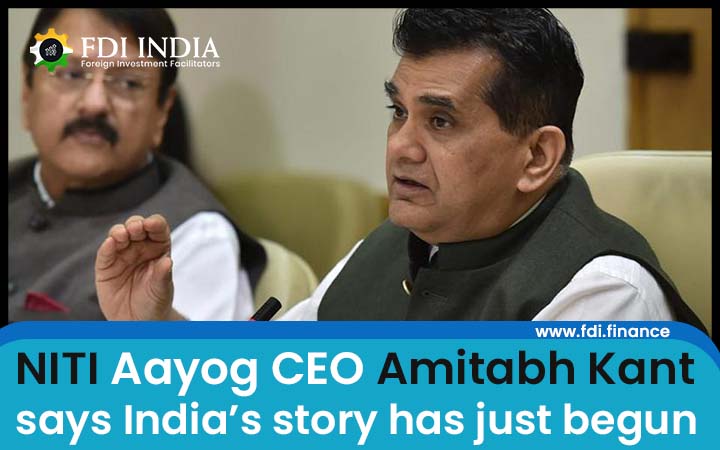 WASHINGTON: An Indian official said on Friday, “The series of path-breaking and ambitious reforms unleashed by the Modi government in the last few years will make India a very competitive and productively-efficient economy in the long run.”

NITI Aayog CEO Amitabh Kant, who recently completed his US tour of three-city (New York, Boston and Washington DC) for a series of interactions with certain people, said that India has a great positivity.

“India’s story has just begun,” said Kant adding that the changes in the Indian economy “will make India a very competitive and productively-efficient economy in the long run.”

He further said, “Our process of urbanization, infrastructure creation, using technology to leapfrog has just begun and you will see a huge growth in the next three decades on the foundation of the reforms that have been carried out.”

When Kant was questioned about the country’s economic growth figures that undoubtedly are the lowest in the recent past, he described the long-sightedness of the government. He said, “The goal of the government is to make it a USD 5 trillion economy by 2025. We are all working towards that. We will deliver that and make India one of the easiest and simplest countries in the world. We are determined to reach the top 50 in the next year on World Bank's ease of doing business index and in the top 25 in the next three years. This goal is very much achievable."

Earlier, the NITI CEO released the India Innovation Index at an event which was organized by the US India Business Council in collaboration with Google in the US.

He also added that PM Narendra Modi has handed over the challenge to the bureaucracy to let India be counted amongst the top 50 of the ease of doing business index in the next one year and the level should increase up to top 25 in the next three years. “He has asked us to make India very very easy and simple.”

Kant further opened up on the FDI in India that has seen significant growth in the past five years while other parts of the world have witnessed a downfall. He said, “We are a great believer that India necessarily has to be an integral part of the global supply chain. And therefore, India has opened up its foreign direct investment regime across sectors.”

When the government implemented Goods and Services Tax (GST), it certainly kept India on its way to become one of the most formalized economies, said Kant.

“Across different sectors, India has gone digital. That's the biggest transformation that has taken place. As a result, India has become hugely data-rich, even before it has become rich. This data richness of India has led to over 1,000 startups working in learnings, artificial intelligence and they are doing the kind of disruption that the world has never seen before. Many of them are doing path-breaking work,” Kant concluded.