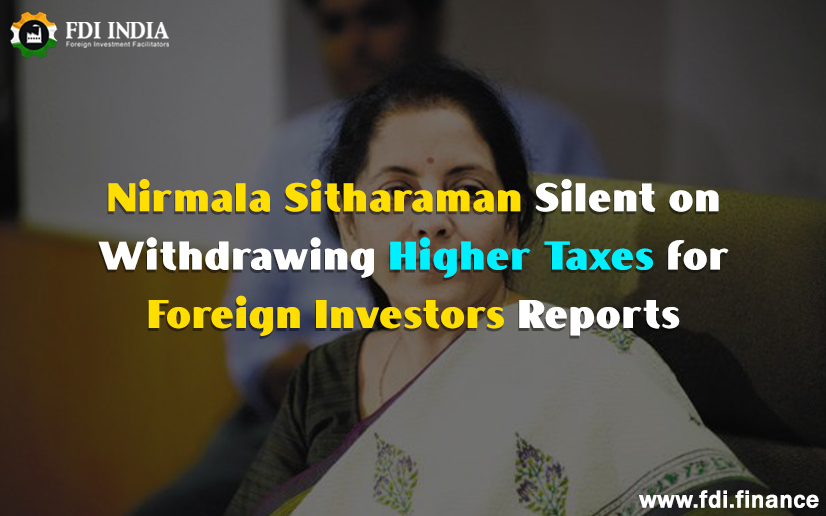 Finance Minister Nirmala Sitharaman at a meeting with foreign portfolio investors on Friday gave no suggestion that she would be withdrawing a proposal to raise their taxes, reported some investors present at the meeting.

The Finance Minister in her proposed budget had introduced tax increases which was sanctioned by the parliament last month. This move unnerved many overseas investors who in turn pulled 1.8 billion dollars out of Indian equities in the month of July alone.

As per what sources told Reuters on Thursday, the Government of India was considering an exemption for foreign investors from tax increase, which would be imposed on those who earn more than Rs. 2 crore a year.

According to foreign portfolio investors who were present at the said meeting, Sitharaman "only heard us and did not speak” at the meeting with foreign investors.

Among those who met Sitharaman to discuss the much in talk and controversial tax of Foreign Institutional Investors (FIIs) were JP Morgan, HSBC, Barclays, Standard Chartered, Deutsche Bank and prominent Indian company representatives.

Among the 18 Foreign Portfolio Investors (FPIs) were also representatives from JP Morgan, HSBC, Blackrock, CLSA and Barclay, who met the Finance Minister in order to address issues such as the recently-introduced tax addition and seek either full rollback or suitable adjustment to keep them out of the higher tax net.