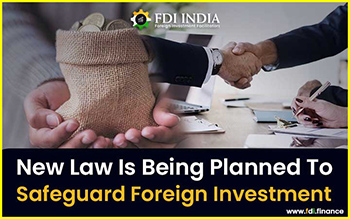 New Law Is Being Planned To Safeguard Foreign Investment

New Law Is Being Planned To Safeguard Foreign Investment

Indian Government currently plans a new law in order to protect the foreign investment by speeding up the disagreement resolution as told by the two officials to Reuters. The aim is to attract more overseas money so as to boost up domestic growth.

One source said, “In a 40-page initial draft, India's finance ministry has proposed appointing a mediator and setting up fast-track courts to settle disputes between investors and the government.”

Highlighting the main idea and also staring the biggest issue, an official said, “The idea is to attract and promote foreign investment, but a major issue for investors is the enforcement of contracts and speedy dispute resolution.”

The initial draft proposal aims at the diffusion of investor’s mistrust that they face in the agreement papers. This mistrust was further worsened in recent times when the state government made the decision to review the approved projects, or even threatened to cancel contracts.

The proposal is still being administered by various regulators and ministries and hence, it is not made public for now. This is the reason why the two officials wanted to remain unnamed.

A Finance ministry’s spokesperson refused to give any comment over the matter.

The second official said that the biggest concern of any foreign investor strict compulsion of too many contracts and the investors have been quite open about it. The source further added that if that front will be improved then it will also ease the lawsuit or the government.

No doubt that these investors can still take the help of the existing judiciary system for settling any dispute but it may take years for the case to be decided.

Previously, there was an option for the investors of taking India to international arbitration courts under bilateral investment treaties (BITs) but now India allowed most of its treaties to lapse after suffering major disadvantages in such overseas arbitration matters.

India has been surrounded by the most number of overseas arbitration cases (more than 20) filed by companies like Deutsche Telekom, Vodafone and Nissan Motors for the breach of contracts and disputes over retrospective tax claims.

These cases were brought before its most of BITs lapsed. If India ends up losing these cases then it may have to pay billions of dollars for the damage done.

The first source said, “The government's thinking is that India may not need to sign investment treaties with other nations if the new law, which is modeled on a BIT, can give confidence to investors.”

“A domestic law, however, cannot be a substitute for a BIT as its scope cannot allow investors to take their case to international arbitration,” the sources signed off.