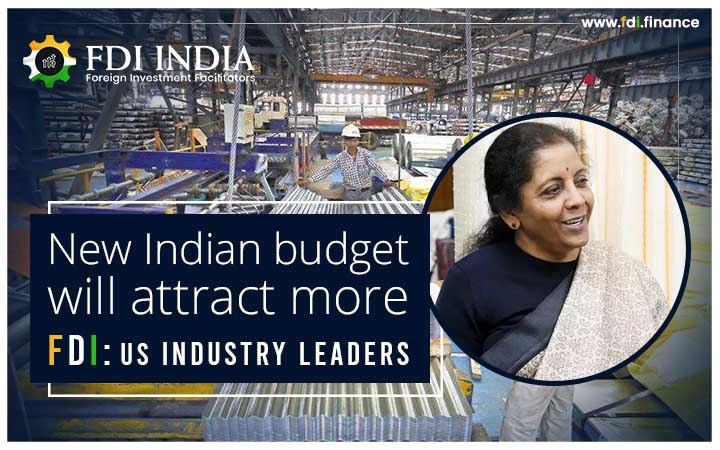 Talking about India’s 2020-21 budget presented by Finance Minister Nirmala Sitharamn, industry leaders from the United States said that it will improve the ease of doing business in India and also attract more foreign direct investments.

In her second budget, Sitharaman presented tax breaks to overseas investors; specifically the ones like sovereign wealth funds who have a lasting interest in the Indian economy and willing to place a long-term bet on India.

While presenting the budget in the parliament, the finance minister said that this fiscal year’s budget was aimed at increasing incomes and boosting purchasing power. She assured that the country’s fundamentals were strong and inflation was well under control.

The president of US-India Strategic and Partnership Forum (USISPF) Mukesh Aghi said, “Despite a slowdown in growth, the global outlook for investment in India remains strong and therefore the budget was a great opportunity to convert the global sentiment into action.”

Even as he complemented Sitharaman for taking steps to boost investments in infrastructure sector, including digital, Aghi said the USISPF believed that the budget could have gone further to liberalise sectors such as insurance that are in need of capital.

“On ease of doing business, measures such as simplified GST returns, no audit requirement for MSMEs with up to Rs 5 Cr turnover, instant issuance of PAN by furnishing Aadhaar, pre-filing of tax returns, faceless appeals and assessments will further enhance India's image from an ease of doing business perspective. Together, these steps show that India's tax policy is moving in the right direction,” Aghi said.

He also urged the government to reconsider its decision to impose one per cent TDS on e-commerce as e-commerce is a bright spot of the Indian economy and expected to touch USD 84 billion by 2021.

“This creates differential treatment of sellers on these platforms and the burden will be ultimately passed on to the consumers,” he said.

The US-India Business Council (USIBC), welcoming the new budget said that the elimination of the dividend distribution tax (DDT) removes a major deterrent to overseas companies looking to set up operations in India.

The finance minister has taken solid steps to increase foreign investment and boost Make in India, it said.

“The decision would result in increased manufacturing in India leading to higher adoption rate for medical electronic equipment due to increased exports and cost-effective production,” it said.