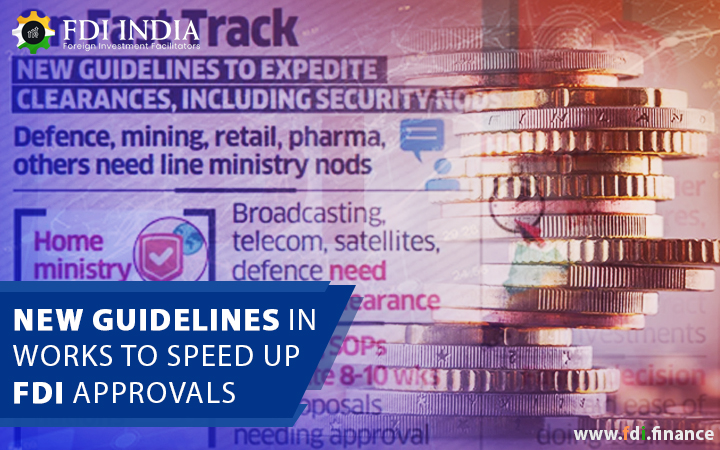 New Guidelines In Works To Speed Up FDI Approvals

New Guidelines In Works To Speed Up FDI Approvals

As per the SOP when the Foreign Investment Promotion Board was abolished, 8-10 weeks was the time fixed for the decision on the protocols that need approval and about 20 documents. The government of India, eyeing overseas investments, has begun working to revamp the Standard Operating Procedure (SOP) for processing foreign direct investment (FDI) proposals to fast track approvals.

The Department for Promotion of Industry and Internal Trade (DPIIT) is very well prepared with the new set of guidelines to expedite the whole process for clearances, inclusive of security, for the overall investment proposals on the approval route.

“An updated SOP on FDI is in the works with updated timelines and procedures,” said an official.

To ensure timely disposal of the FDI proposals, overall periodic reviews are carried out and done by the department and the Cabinet Secretary with other stakeholder ministries.

Officials said an updating of the procedures is required as many changes in the policy have taken place in the last few years such as in sectoral caps.

“It will speed up the FDI that comes through the approval route. The existing SOPs are 3-4 years old and there is a need to make them contemporary,” said another official.

India received about $35.37 billion foreign direct investment during April-August 2020, this is the highest recorded so far in the first five months of a financial year.

The second official said that while dependency has reduced, some of the ministries usually take time while giving approvals. FDI in sectors such as defence, mining, retail, pharmaceuticals, civil aviation, media and banking requires approval from the respective ministries.

Besides, the overall security clearance from home ministry is required in the overall investments in broadcasting, telecommunication, satellites - establishment and operation, private security agencies, defence, civil aviation and mining & mineral separation of titanium bearing minerals and ores, its value addition and integrated activities.

The latest norms mandate that you need government approval before getting into anything, inclusive of the security clearance for all FDI coming from India's land-border sharing countries including from China. Over 100 proposals involving investment from China and Hong Kong have been held back for government nod. An inter-ministerial committee headed by the home secretary has been set up vet these proposals