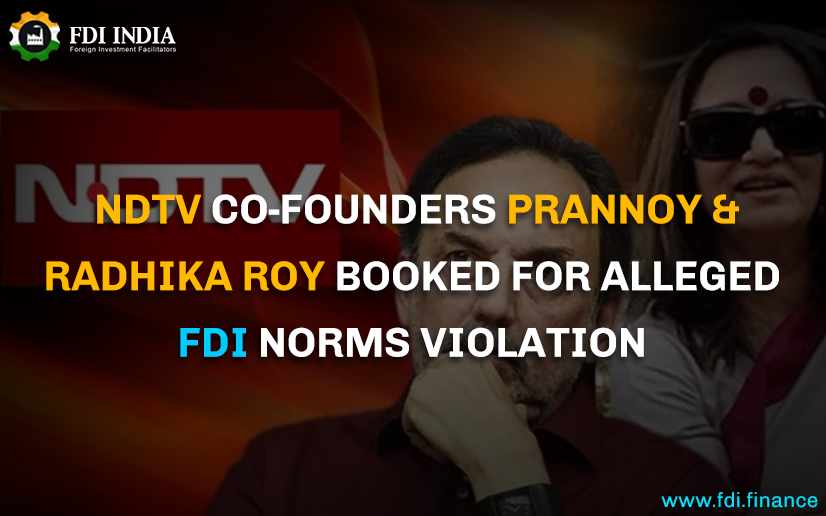 NDTV co-founders Prannoy Roy and wife Radhika Roy have been booked by the CBI in connection with an alleged violation of foreign direct investment rules on August 21.

NDTV founders are not the only ones to have come under the radar of the CBI. the agency has also booked Vikramaditya Chandra, the media company’s former CEO under chargers of criminal conspiracy, corruption and cheating, reported officials.

As per the officials, a CBI team carried out searchers at Chandra’s residence yesterday.

The company is said to have floated 32 subsidiaries in several tax haven countries in order to bring overseas funds to India via scam transactions.

The CBI has alleged that NNPLC got an approval from the Foreign Investment Promotion board (FIBP) in violation of foreign direct investment rules in 2009.

NNPLC is said to have received overseas investments amounting to 163.43 million USD. this investment was various NDTV subsidiaries through various complex transactions.

NDTV released a statement denying all charges and accusations set forward by the CBI.

"NDTV and its founders have full faith in India's judiciary at this crucial time and remain committed to the integrity of the company's journalism. Attempts to silence free and fair reportage through malicious and fabricated charges will not succeed. This is not about a company or individuals but about a larger battle to maintain the freedom of the press, something which India has always been renowned for," it said.

As part of "the continued persecution of free press", it said, a new CBI case has been filed about a USD 150 million investment in NDTV's non-news business by NCBU, then owned by General Electric.

"The case makes the ludicrous charge that the transaction, declared to all relevant authorities in the US and India, laundered money for unknown public servants," it said.

The FIR comes after a preliminary enquiry registered by the CBI in 2016. During the period of Ma 2004 to May 2010, NDTV is said to have 32 subsidiaries all over the world including the United Kingdom, Dubai, Malaysia, Mauritius, etc.

According to the CBI, most of these companies had no business transactions and were only meant to bring funds into the country.

they termed these transactions a “sham” and maintained that the funds were invested by unidentified public servants through the media house and laundered back to India via multiple transactions and shell companies.