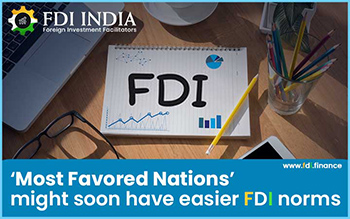 ‘Most Favored Nations’ Might Soon Have Easier FDI Norms

‘Most Favored Nations’ Might Soon Have Easier FDI Norms

NEW DELHI: The government is working on a new investment law with which nations will be categorized as ‘most favored’ and ‘not pro India’. Besides, the law will also emphasize on contract enforcement and fast dispute resolution.

The Budget session of Parliament is scheduled to begin from 31st January and the new bill is most likely to be introduced there only. Officials close to the development told Business Line, “Draft of the Bill, which is being vetted by the Law Ministry, will be placed before the Cabinet for approval for introduction in Parliament.”

The bill might get mentioned in the Budget speech and efforts are being made that it gets passed during the session itself.

The bill is being proposed at an apt time as the government has brought up the National Infrastructure Pipeline plan for which it has envisioned an investment of over 102-lakh crores and a good amount is expected from the overseas.

The drawn plan is quite significant in achieving a $5-trillion economy. More tax benefits and regulatory relaxations will be for the ‘Most Favored Nations’ under the bill.

Statistics suggest that India failed to attract the companies that moved out of China after the tariff war with the US. However, the law being proposed might get successful in increasing such companies’ interests towards the country that shifted its base to South-Asian nations.

The existing FDI policy allows 100?I in most of the sectors under the automatic route. However, there might be reforms in the FDI policy in several routes like financial services, Defense, broadcasting, pharmaceuticals, single-brand retail, asset reconstruction companies, e-commerce, civil aviation, coal mining, digital media and contract manufacturing.

The bill will also aim at contract enforcement which is an aspect of ease of doing business in which India has no significant growth although its overall ranking moved up 14 places to reach 63rd rank in the year 2020.

The officials said, “Keeping in mind the World Bank’s observations, this aspect has been given importance in the proposed law.”

Contract enforcement will be taken to the next step through dispute resolution. “Setting up of more commercial courts and more NCLT (National Company Law Tribunal) benches will be the key to dispute resolution,” added the officials.