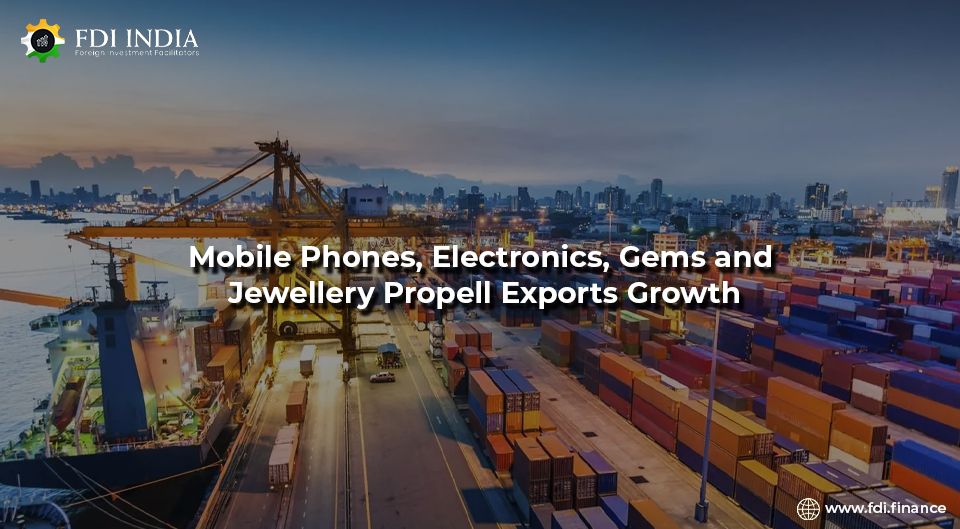 Outbound shipments of telecommunication equipment from the nation rose 88.24% on year in September FY23 at 45.03 Billion. Telecommunications not being the only dynamic witnessing growth Gold and other precious metallic jewelry grew 22.245 at $6.5 billion, the driving force being the consumer sentiment across the US, the Middle East, and Hong Kong. Thailand, Switzerland, and Singapore have expressed keen interest as net growth markets in the nation's gem and jewelry exports quotient.

Petroleum products showcased a whopping 84.02% TO $52.6 Billion. Processed fruits and vegetable exports increased by 42.42% during the period, and those of electronic instruments showcased a rise of about 24%.

World trade growth is bound to reduce to 1% in 2023, down sharply from the previous estimate of about 3.4% due to global uncertainties, as reported by the World Trade Organization. Tobacco, mobile phones, processed foods, electronics, gold jewelry, and leather goods have driven India's merchandise exports for the fiscal at a time when the global trade volume has been shrinking rapidly.

We have been working with all the stakeholders, such as farmers, exporters, and processors, to ensure that quality agricultural and processed food products are exported from the country," said M Angamuthu, chairman of the Agricultural and Processed Food Export Development Authority.

The overall exports of agricultural and processed food products have risen 25% to 413.7 billion in April-September FY23 compared to the same period last year. While certain merchandise has showcased a valid progression, exports of iron and steel, organic chemicals, plastic in raw form, and cotton fabrics have slowed down to single digits in the second quarter of the financial year 23. Their exports contracted respectively to about 36.86%, 2.43%,16.67%, and 7.49%, respectively, in the first half of 2022-23.

Some of the most prominent reasons behind the slowing down of international trade for engineered goods are the recessionary economic trends in Europe and China. These recessionary trends have led to a fall in exports of engineering goods, in which iron and steel account for about nearly one-fourth of the total merchandise exports from the country.

Commerce and industry minister Piyush Goyal will likely meet the Export promotion council and an industry representative on Monday to discuss the issues related to Indian trade. The slowdown in exports of engineered goods and a recessionary trend setting in on the global front are two factors the nation has no control over. In the past, these countries have been some of India's most prominent importers of engineered products.

The decreasing exports of engineered goods due to the economic slowdown can be some of the most prime and initial visible signs of a recession on the precipice of spiraling into International trade. International trade is set to shrink as significant players such as the United Kingdom and the US are already reeling from recessionary trends and soaring inflation (US). The make-in-India dream plays a pivotal role here; India has to develop indigenously designed, cost-effective engineering solutions to gain an extensive market share when major exporters are backing off.