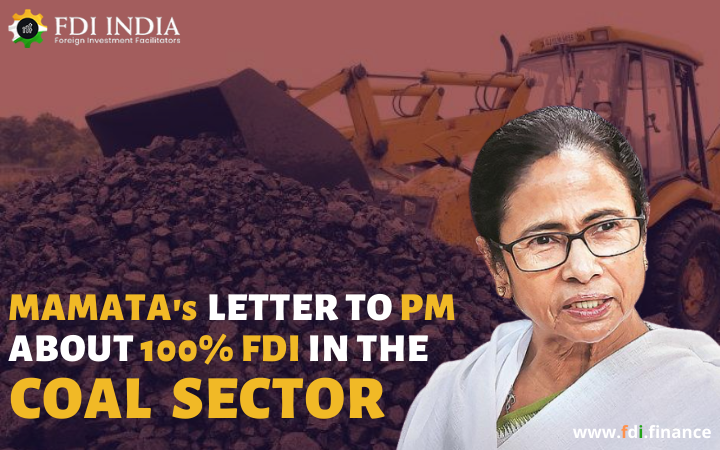 Mamata's Letter to PM About 100?I in the Coal Sector

Mamata's Letter to PM About 100?I in the Coal Sector

Mamata Banerjee has raised concern over the 100?I in the coal sector as Coal India Limited (CIL), is the world's largest coal mining company, and making it open for foreign investors might not go well with the goal and motto of Atmanirbhar Bharat'. This is the recent move that the government has taken of FDI policy in India.

She has opposed the decision of the Modi government for allowing 100?I via automatic route in the coal sector. To express her views against the decisions of the government, West Bengal Chief Minister Mamata Banerjee had written a letter to Prime Minister Narendra Modi.

In her letter, she has termed the coal mining and sector as "nation's pride". She said, "We must not forget that the coal sector was nationalized in 1973 with a specific purpose of the public sector to play a major role in such a strategic sector which is deeply entwined with the energy security of the nation."

"This policy can neither bring foreign direct investments nor can it bring technologies or know-how which we are unable to access today," she states, expressing her reservations on the Centre's recent move.

West Bengal Chief Minister said that the focus has now shifted to renewable energy projects by the foreign investors and they are not inclined towards the coal sector. The philosophy of “Atmanirbhar Bharat” gets deterred with opening Coal India Limited (CIL) for 100?I.

"CIL is producing 80 percent of our coal with profit before tax of Rs 27,000 crore (2018-19) and holding a reserve of Rs 31,000 crore. The decision of the central government to relax FDI restriction demeans the capability of CIL," Mamata Banerjee said in her letter.

Mamata Banerjee has quoted the government’s decision to be "extremely detrimental to the interests of all stakeholders" because the majority of the coal amounting to 80% is produced in the east of India. She has also protested against the decision of the government of shifting the office of the different CIL subsidiaries away from Kolkata.

“The recent abrupt decision to shift the desk offices of four of its subsidiary companies namely Bharat Coking Coal Ltd (BCCL), Central Coalfields Ltd (CCL), South Eastern Coalfields Ltd (SECL) and Mahanadi Coalfields Ltd (MCL) from Kolkata to their respective headquarters in other areas will be extremely detrimental to the interests of all stakeholders of Coal sector including employees,” the chief minister wrote.

"The location of the offices of all the four subsidiaries in the same city acts as an aid in better coordination among them and even the CIL headquartered in Kolkata. The decision to shift them from the present strategic center and commercial hub to other areas will have an adverse effect on our economy," Mamata Banerjee wrote in her letter.