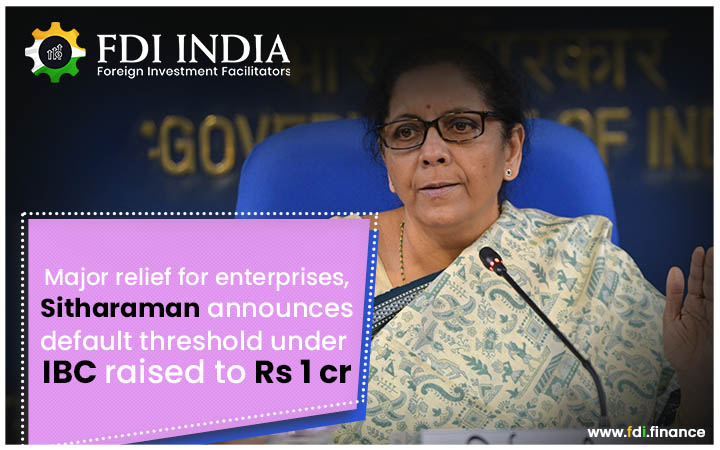 On Tuesday, the central government announced the threshold for default under the IBC to Rs 1 crore from the current Rs 1 lakh, sending major relief on the way of small and medium enterprises.

Union Finance Minister Nirmala Sitharaman, addressing the media through videoconferencing said  that this decision has been taken to prevent the triggering of insolvency proceedings against MSMEs.

She added that the government will be tracking the entire situation and if the situation happens to remain unchanged after April 30, the centre may take into consideration the suspension of  Sections 7, 9, and 10 of the Insolvency and Bankruptcy Code (IBC) for six months.

This step will prevent firms from being pushed into  insolvency proceedings in such force mejuere causes of default.

The decision comes amid the deadly COVID-19 outbreak that has gripped the nation. 30 states and union territories in India have announced complete lockdown. So far, coronavirus cases in the country have crossed 490, with at least 9 deaths reported.

The pandemic has resulted in several business being severely hit and they are likely to continue losses due to the ongoing lockdown. Micro, Small and Medium Enterprises are likely to the more affected due to limited capital reserves.

In the videoconference, the finance minister also said that the deadline for filing returns of goods and services tax (GST) for March, April and May 2020 has been extended to June 30.

Apart from this, she also said that the government has halved the interest rate on delayed TDS deposits to 9 per cent.