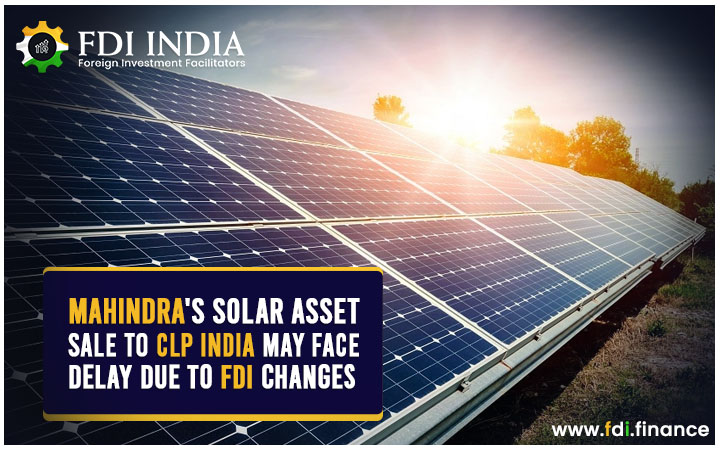 According to sources, the sale of solar assets of Mahindra Susten, the renewable business unit of Mahindra group, to CLP India Pvt Ltd is facing a delay, likely because of the recent FDI policy change that made government approval mandatory for investments coming in from countries that share a border with India.

Mahindra Susten had entered into an agreement in February to sell three solar projects to CLP India— which is a unit of Hong Kong based CLP Holdings Ltd., for an equity value of Rs. 340 crore. The foreign direct investment included the sale of three projects - Cleansolar Renewable Energy Pvt Ltd, Divine Solren Pvt Ltd and Neo Solren Pvt Ltd.

While the sale of Cleansolar was closed on 27 March, and Divine Solren on 16 April, the firm extended the date of finalising sale of Neo Solren project to August end from 31 May. The company cited the deadly COVID-19 outbreak as the reason for the delay.

As reported by Mint, one of the sources blamed the recent amendments to the foreign direct investment policy as the reason for the delay.

"The transaction has got delayed due to changes in the FDI policy that require all investments coming from Chinese owned companies to go through a government approval process. So they will have to wait for the government approval to close the deal," he told Mint.

Fearing “opportunistic takeover” of Indian assets by Chinese companies, the government of India on April 18 introduced a new reform in the existing foreign direct investment policy that stated that investments coming from neighbouring countries needed a prior government approval as opposed to the previous automatic route.

"The CLP transaction has got delayed but it is still on and the government approval is expected to come through. The restrictions were not put in place to stall investments in the renewable sector," said the second person cited above, also requesting anonymity, as reported by Mint.