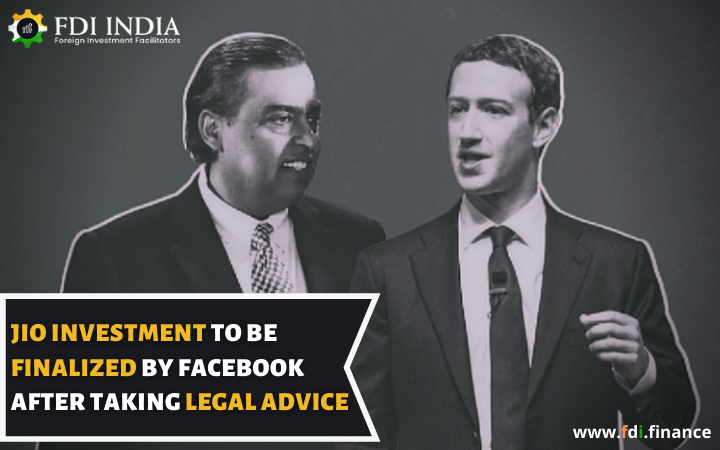 Jio Investment to be finalized by Facebook after Taking Legal Advice

Jio Investment to be finalized by Facebook after Taking Legal Advice

Facebook is on the lookout for legal advice for the finalization of India's FDI Jio investment. This move has been taken by the social media giant for the assurance that no issues would be created in the future regarding the $5.7 billion worth deal with Reliance Jio platforms.

The recent FDI policy amendments, of India that made the government’s approval mandatory for FDI with the countries that India shares a border with has caused Facebook to seek legal advice on the investment as it is a public company and various stakeholders are based in China and Hong Kong.

Facebook has various share holders that include hedge funds and financial institutions, in both Hong Kong and mainland China.

A preliminary screening process will be followed for the investments coming from the border sharing countries like China, Pakistan, Nepal, Bangladesh, and Myanmar.

The amendment in the FDI policy is applicable also to the transfer of ownership of any existing or future FDI in an entity in India, directly or indirectly.

A report by Business Standard has mentioned that the approvals have to be taken by the investors and not by the companies that the investments are to be made. If the new FDI policy agreements are applied to the indirect investments from China, then Facebook will have to take approval from the Ministries in India.

According to the Inc42 report, the amendment in the FDI policy is also applied to the indirect investments. The Competition Commission of India (CCI) is analyzing the Reliance Jio Platforms and Facebook deal and Facebook is also carving its way in the midst of the requirement of FDI approval.

In the email interview conducted by Bloomberg of CCI Chairman Ashok Kumar Gupta, stated that the competition watchdog is looking to prevent the misuse of data in all the deals it assesses.

He did not comment on the Facebook-Jio deal but he further added that the CCI is developing new parameters to be added in the assessment criteria.