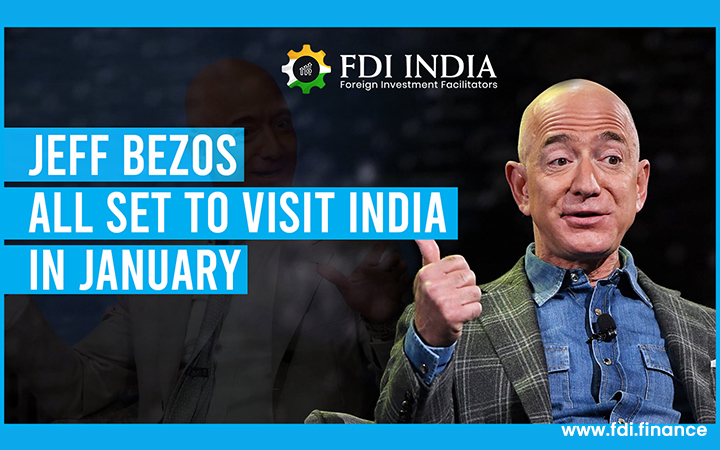 Jeff Bezos All Set To Visit India in January

Jeff Bezos All Set To Visit India in January

Amazon founder Jeff Bezos is all set to visit India in January where he is likely to meet Indian Prime Minister Narendra Modi. Bezos’ visit comes amid protests by a group of small traders who are raising objections on foreign-funded e-commerce firms.

During his visit, Jeff will be starting off the US retailer’s annual event around small and medium companies that are hit by deep-pocketed e-commerce companies.

Bezos, who is the founder of the world’s largest online retailer is reportedly concerned over the changing e-commerce rules and regulations in India. His worries are natural, given that his Seattle-based company has invested a significant amount of more than $ 5 billion and, therefore, creating one of its largest foreign subsidiaries.

According to sources Jeff Bezos will be emphasising that amazon is generating jobs and employment in India and also empowering SME’s and other small businesses. The sources, who are familiar with the matter further said that the founder will also raise matters such as stable working environment and policy continuity for foreign companies.

Concern from small traders escalated after Diwali when they accused ecommerce giants Flipkart and Amazon for “unfair business practices” and violation of foreign direct investment or FDI norms. The outcry was against the “predatory pricing” strategies introduced by the two companies.

As per reports by Red Seer Consulting, Amazon and Flipkart together generated a total of 31,000 crore or $ 4.3 billion during their 15 day festival sale in the month of October.

The government of India has been stepping up its inspection process of Amazon and Flipkart’s compliance with existing foreign direct investment norms and policies.

Amazon and its Indian rival Flipkart were asked to disclose details including their shareholding, subsidiaries, business structure and information on their top sellers and their tax details by the commerce ministry.

Both the companies in response to the questions raised by the government said that they were following al FDI rules and regulations.

Devangshu Dutta, CEO of retail consultancy Third Eyesight said, “The various twists and turns in policies and caveats over the years have created ambiguity and room for interpretation as to what is allowed under the ambit of foreign investment.”

“If any foreign-owned or foreign invested entity is operating in the fuzzy zones of policy and law, there is bound to be concern. ‘Interpretation’ is a double-edged sword — on the plus-side it can give businesses strategy flexibility, but the downside is that government officials can also interpret it strictly.”

In 2018 Walmart had purchased Flipkart for $16 billion, bringing the US adversaries to a direct fight over market share in the nation’s burgeoning online retailing market.

Walmart CEO Doug McMillon, in October had written to Modi, looking for certainty and a predictable business environment in India.