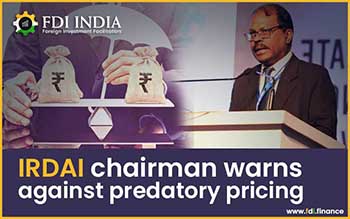 Chairman of Insurance Regulatory and Development Authority of India (IRDAI), S C Khuntia on Friday warned insurers against partaking in predatory pricing, telling them that it is not a sustainable method. He supported his caution with examples of airline and telecom sectors.

He threw light on how the insurance industry was different from any other business sector, saying that if an insurer fails, the customers have to bear the brunt.

"So the insurance companies, intermediaries and policyholders need to unite to create a sustainable atmosphere. In other industries if there is unfair competition, the industry suffers but the clientele don't suffer. While this has happened in airlines and telecom industries but we cannot afford that kind of a situation in the insurance industry because insurance is an industry for protection," he added.

He said that if the insurance industry suffers, then their clients also suffer, adding that as a regulator IRDAI would not like this to happen. He also said that the sector should stay away from overcharging and undercharging likewise.

When asked if companies are engaging in predatory pricing in order to up their volume, the IRDAI chief replied with a “of course, of course.”

"Regulator will have to ensure that the industry runs sustainably. There will be host of actions not one kind of action (to check predatory pricing) but we will ensure that the health of insurance industry does not deteriorate," he said.

He was also asked for his views on increasing the foreign direct investment in the insurance sector from the current 49 per cent, S C Khuntia said IRDAI had sought the opinions of stakeholders on increasing FDI to 74 per cent and the discussion has been forwarded to the government.

"Now according to the Insurance Act, 49 per cent is the maximum limit for foreign direct investment. If it goes to 74 per cent naturally the Act has to be amended," he said.

He said that no decision has been taken on ownership and control.

Economic Times had reported that the Finance Ministry is deliberating on increasing the foreign direct investment or FDI limit in insurance and pension companies to 74 per cent from the current 49 per cent. Apart from this the ministry is also suggested to permit foreign airlines to own Indian carriers. ET sources asked not to be identified given the plan is not yet public.