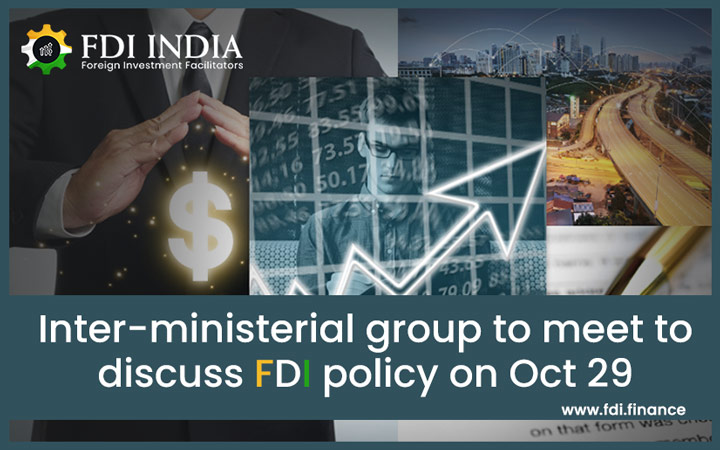 As per an official, an inter-ministerial group will be meeting on 29 October in order to discuss foreign direct investment policies and deliberate on the possibility of further simplifying the rules, regulations, and policies of FDI. The objective of this discussion is to attract more overseas investments in India.

Guruprasad Moapatra, secretary of Department for Promotion of Industry and Internal Trade (DPIIT) will be leading the meeting.

Foreign direct investments are a critical driver of economic growth in the country. After India witnessed a dip in FDI equity inflows for the first time in 6 years in the fiscal year 2018-19, the government of India introduced several reforms in foreign direct investment policies. These changes took place across different sectors such as digital media, single brand retail trade, contract manufacturing, and coal mining.

The meeting that will take place on October 29th will see officials from different ministers like defence, electronics and IT, information and broadcasting, and finance in attendance.

The inter-ministerial meet is of great significance as the ministry will be discussing with different ministries and departments to look at different sectors in the economy where further liberalization of FDI policies is possible.

There are two routes by which a foreign investor can invest in the country: Automatic and government. Under the automatic route, no prior approval is needed to make an investment in India. The foreign investor just has to inform the Reserve Bank of India once the investment is made. Through the government route, the overseas investor is required to take a prior approval from the government and its concerned ministries and departments.

Finance Minister Nirmla Sitharaman had proposed reforms and ease in foreign direct investment policies in her maiden budget in July. The sectors that she suggested these reforms in include insurance, aviation, AVCG (visual effects, animation, gaming and comics), and single brand retail trade.