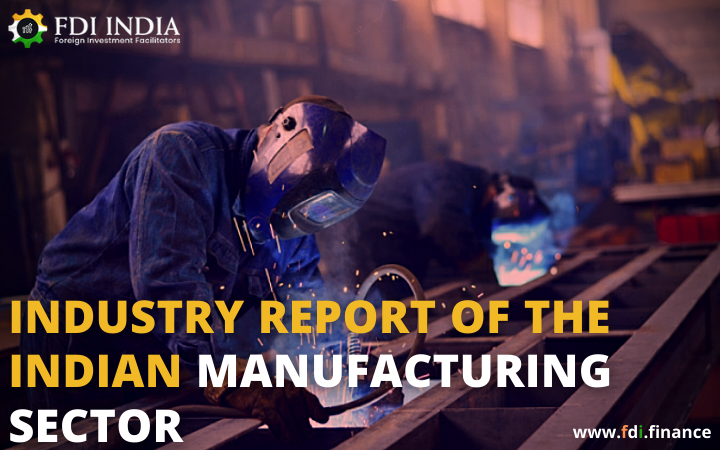 In India, manufacturing has been emerging as a developing sector and this further got accelerated by the Prime Minister's initiative of Make in India program that will enable India to emerge as a manufacturing hub and bring reform in the Indian economy.

The Make in India program has a goal to develop job opportunities amounting to 100 million by 2022 and this will bring quite instrumental change in India's employment sector as the creation of jobs in India is the need of the hour.

The manufacturing sector GVA was calculated to be US $397.14 billion in FY20PR. a growth of CAGR of 5% was recorded during FY16 and FY20 according to the national income given by the Government of India.

The merchandise export reduced 4.78% YOY to reach US $314.31 billion in FY20 but the business environment of the manufacturing sector is very positive.  The manufacturing component of IIP is at 129.8 in FY20 and India’s Index of eight core industries is at 131.9 in FY20.

The global giants are in the process of establishing the manufacturing plants in the country such as GE, Siemens, HTC, Toshiba, and Boeing due to the Make in India initiative.

India is on the pathway in emerging as a hub for hi-tech manufacturing as the global companies want to set up their manufacturing plants in India due to the high purchasing power of the citizens and over billion consumers.

In the period of April 2000-March 2020, the Cumulative Foreign Direct Investment (FDI) in the manufacturing sector of India was amounting to US $88.45 billion.

India has emerged as the premier destination for manufacturing sector investments.

The following are the recent investments in the manufacturing sector of India:

1. In May 2020, Sterling and Wilson Solar Limited (SWSL) bagged an Engineering Procurement Construction (EPC) contract in Australia for Rs 2,600 crore (US$ 368.85 million).

2. In March 2020, Oricon Enterprises entered into a joint venture agreement with Italy-headquartered Tecnocap Group to set up a new company, Tecnocap Oriental, for manufacturing lug caps.

3. In September 2019, Mumbai got its first metro coach manufactured by state-run Bharat Earth Movers (BEML) under the 'Make-in-India' initiative.

4. In October 2019, Berger Paints India Ltd, a Kolkata-based company, acquired a 95.53 percent stake of STP Ltd (STPL), which is primarily into waterproofing and protective coatings.

5. In September 2019, OnePlus launched its smart TVs in the Indian market.

7. Capacity utilization in India’s manufacturing sector stood at 69.1 percent in the second quarter of 2019-20.

1. In May 2020, Government increased FDI in Defence manufacturing under the automatic route from 49 percent to 74 percent.

3. As per the Ministry of Statistics and Programme Implementation (MOSPI) report on Payroll Reporting in India, the number of new subscribers* under Employees’ Provident Fund Scheme reached 4,01,949 in March 2020.

6. In August 2019, the Government permitted 100 percent FDI in contract manufacturing through the automatic route.

8. In February 2019, the Union Cabinet passed National Policy on Electronics (NPE), envisaged to create a US$ 400 billion electronics manufacturing industry in the country by 2025. 32 percent growth rate has been targeted globally in the next five years.

9. Under the Make in India initiative, the Government aims to increase the share of the manufacturing sector to the country’s GDP to 25 percent by 2025.

10. Under the Mid-Term Review of Foreign Trade Policy (2015-20), the Government of India increased export incentives available to labor-intensive MSME sectors by 2 percent. In April 2020, Government extended FTP for one more year, up to March 31, 2021.

The various global investors are wanting to invest in establishing manufacturing plants in the country. This will be very beneficial for the Indian economy and for the success of the Make in India initiative by the Prime Minister of India.

It has been estimated that the Indian manufacturing sector will be amounting to be of US $1 trillion by 2025. The big population of India standing at 1.32 billion attracts the global companies to set their manufacturing base in the country. India will become a common market with a GDP of US $2.5 trillion with the execution of Good and Services Tax (GST).