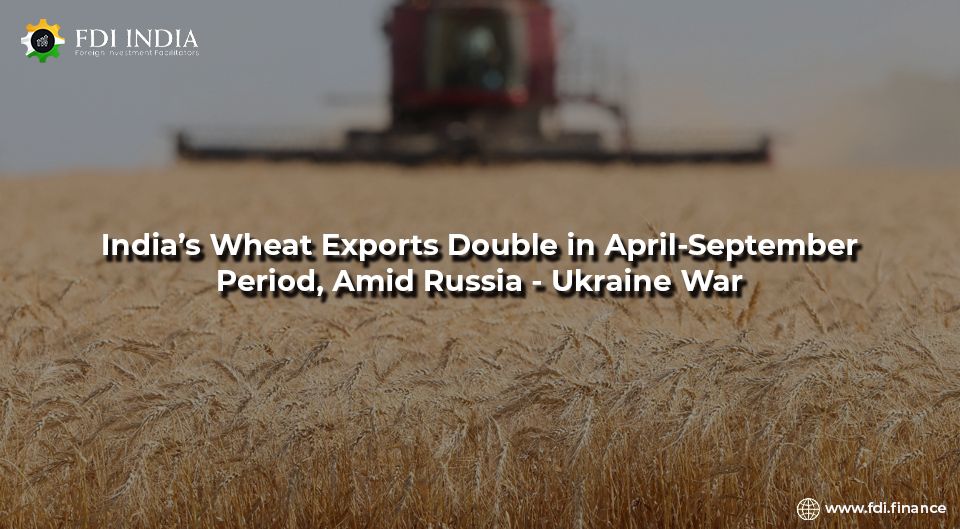 While The Indian government banned wheat exports in May, some shipments were allowed to meet the food security needs of the foreign countries requesting it. As according to present media reports, the country's wheat exports more than doubled to USD 1.48 Billion during April –September 2022-23 as compared to the year-ago period, as reported by the commerce industry on Wednesday. The exports stood somewhere around the USD 630 million mark a year ago.

The global wheat supply has been severely disrupted because of the Russia-Ukraine war; both of the countries that are major wheat producers. According to the ministry, agricultural and processed products exports rose 25% during the 6 months of this fiscal year.

For the ongoing year of 2022-23, an export target of about USD 23.56 billion has been fixed by APEDA, and an export of USD 13.77 billion has already been achieved in the time that has elapsed.

The export of fresh fruits was at about USD 303 million a year ago and has increased exponentially to USD313 million during the period. The export of lentils increased from USD 135 million to USD 330 million.

A similar fate was received by the basmati rice exports, which increased to USD 2.28 billion in April-September 2022 from USD 1.66 billion a year ago. Basmati exports registered a growth of 8% to USD3.20 billion. If these were not all, the export of poultry products rose by 83% to USD 57 million, while shipments of dairy products increased 58% to USD 342 million.

In the global slowdown, India has somewhat been at a vantage point, taking advantage of the failure of exports from countries like Russia and Ukriane. The sanctions instated on Russia have directly impacted the region's possible exports.

While according to last year's data, India served its position as a marginal exporter of wheat, but as of now, it has progressed leaps and bounds to attain a profound position as a wheat exporter. According to a media report released by The Print, some of the main reasons behind the sudden increase in wheat exports have been –

The increasing wheat exports would help promote India's status as a global wheat merchant. The nations who had before this bought wheat from other countries would now find a resolute trading partner in India as the war continues to change the global climate. But to keep these rates of exports where they are, India would have to make sure that its Wheat export rates stay put where they are by boosting the local produce, which is still highly weather dependent.