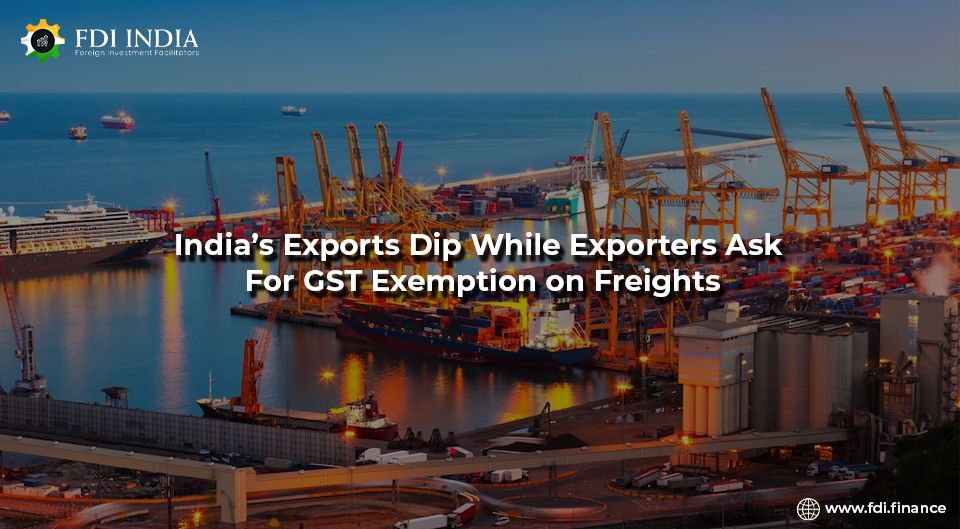 While A severe contraction in exports by 3.52% to USD 32.6 billion in September against 33.81 billion in September last year, while at the same time trade deficit widened to USD 26.72 billion, according to preliminary data brought forward by the Commerce ministry on Monday.

The trade fiscal in the first six months has widened to USD 149.47 billion as against YUSD 76.25 billion during the same month last year.

Exporters as well, in recent times, have asked for an extension of the Previously granted exemption from goods and services tax on export freight, citing that a non-extension would add up to their already existing predicament of liquidity challenges.

The alleged requests were the subject matter of a letter to minister Nirmala Sitharaman on Sunday. The Federation of Indian Export Organization announced that overseas freight had increased 300-350% from the Pre-Covid level and refund of GST through input tax credit comes after a tenure of two-three months, which affects cash flow.

The exemption on export freight introduced in 2018 ended on September 30; this conclusion of the scheme was reached after the exemption was extended twice under different economic circumstances. As a result, exporters now have to pay 18% GST on export Ocean Freight for which they can claim a refund later on.

"The global trade is entering into a very difficult phase as countries are facing high inflation and impending recession affecting demand. The rate of growth in exports is also coming down as can be seen in export growth rate from April-August 2022," FIEO said.

While an exemption is a short-term relief, exporters in the future would have to pay according to the ocean freight rate being levied upon the exports.

While taxes would be levied on most of the products and items exported to other nations, here are a few commodities whose exports are not applicable for GST. This is only when goods are transported through a goods transport agency.

Under GST, When a product purchased falls under the 5% GST bracket, the shipping charge will be 5%. If the product falls under the 18% bracket, then the shipping charge will be 18%. Please note that the GST rate is charged depending on which bracket that product will fall under GST, i.e., 5%, 18%, 28%, etc. While an exemption would be a short time relief, it would be helpful for exporters to pace their services better than before and plan their operations considering the additional tax additions.