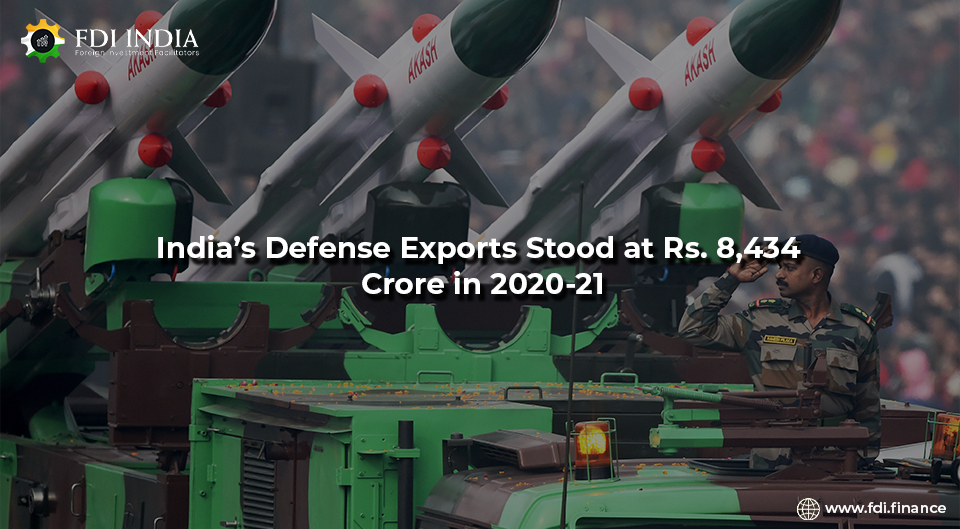 The ministry added that the steps taken by the Modi government to amplify defense exports include repealing a section of the Special Chemicals, Organisms, Materials, Equipment, and Technologies (SCOMET) list, allowing easier exports.

Additional steps such as the launch of an online portal for receiving and processing export authorization permission, allowing legal export of parts and components of small arms and body armor for civil use after authorization from the foreign ministry, and granting powers to public sector defense units to explore avenues for global tender participation and exports.

The statement further elaborated that the increased defense exports can be attributed to the recent decision of the government to raise the limit for foreign direct investment (FDI) in the defense sector up to 74% through the automatic route for firms seeking a new industrial license and up to 100% through the government route if it grants access to latest technological advancements.

“In order to promote indigenous design and development of defense equipment, the ‘Buy Indigenously Designed, Developed and Manufactured’ category has been accorded topmost priority for procurement of capital equipment,” the statement said.

To boost domestic defense production capability, the Defense Procurement Policy of 2016 was revised into the Defense Acquisition Procedure 2020.

“The Ministry of Defense has notified two ‘positive indigenization lists’ of a total of 209 items for which there would be an embargo on import beyond the timeline indicated against them. This is a big step towards self-reliance in defense,” the ministry stated.

India is a major importer of arms. The prime minister has encouraged Indian companies to start or expand the production of military equipment to make India self-reliant in the defense sector.

Prime Minister Narendra Modi has set Indian companies a target of $5 billion in defense exports by 2025.