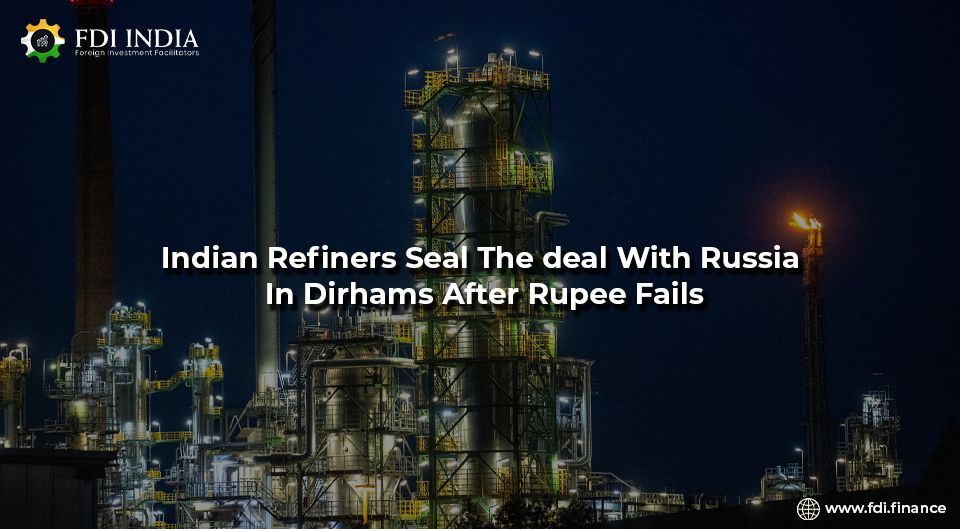 Russia suffering from the sanctions levied on it in the aftermath of its invasion of Ukraine, had committed importers of its commodities to pay using rubles or other currencies than the dollar and Euro in which its contracts are typically priced in.

Indian companies are still pursuing buying Russian oil using dollars after Dubai's Mashreq bank declined to handle the payments to Emirati refineries as requested by the supplier. In July, at least two Indian Companies settled in dirham. According to media reports by Reuters showcased that oil payments were calculated in dollars while being requested in dirhams.

The bill also pertained info about how the money was to be directed through Mashreq bank to Gazprom bank. However, according to sources, the payment did not go through, as Mashreq bank declined to facilitate the trade.

According to published sources, it has been established that the payments were finally settled in dollars by the Abu Dhabi branch of The State Bank Of India. The United Arab Emirates and India have avoided Strong criticism of Russia's actions in Ukraine, dodging prudent media cross-questioning about the stand. With the countries have not imposed any sanctions upon Russia.

The new Mechanism to be used For Dealings with Russia

The trade ties with Russia continued even after strict sanctions from other nations. India has established a way to deal with Russia with its own currency. The new Mechanism is similar to the one established with Iran when it was under sanctions. In the following Mechanism, Indian importers deposited Rupee payments in a Vostro account established in Tehran's commercial banks, with UCO bank being the state-run lender.

The money deposited in Tehran was utilized for imports of non-sanctioned goods from India. In the prospects of deals being conveyed with Russia, UCO bank, with the approval of the Central Bank of India, has opened a special rupee account for Russia's Gazprom Bank. Under the new Mechanism, Importers and Exporters would have to agree to Invoice in rupees and settle exchange rate terms.

To make the trade in local currency a more enticing deal, India has allowed foreign banks to invest excess funds in government securities as the special rupee account and offer no interest on deposits. Western sanctions have persuaded many importers to restrict themselves from buying and importing from Moscow, which has, in return, brought a depletion in the spot prices of Russian Crude oil to record low prices against other grades.

This has been one of the most paramount behind Indian importers jumping up to grab the opportunity, even though previously, they rarely bought Russian oil due to high freight costs.

Russia has become a prominent example of what an all-out brazen behaviour and neglect of diplomacy gets you in the modern world. According to stats shared by World Bank in a recent report, 2022 would be a bad year for the Russian Economy. The Russian GDP is expected to decline by 11%, one of the most critical drops ever since the collapse of the Soviet Union.

The restrictive measure imposed upon Russia targets the import and export of certain goods. The list of banned products has been designed in such a way that the negative impacts of the sanctions on the Russian Economy are maximised. And the policies seem to have been showing results, with the World Bank sharing estimates of Russian Trade and Services declining significantly.