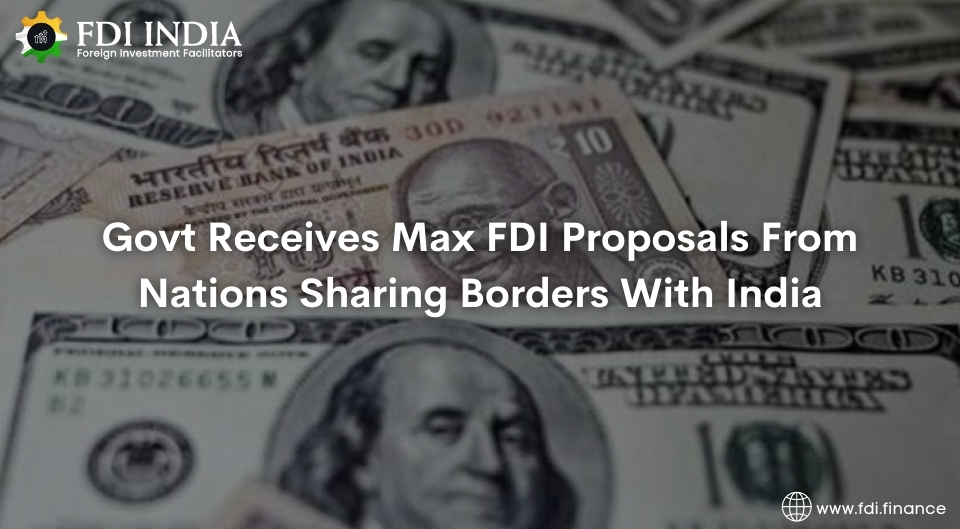 Manufacturing of heavy equipment, automobiles, and auto components; computer software and hardware; trade, ecommerce, and light engineering and electrical manufacturing were among the key industries from which these FDI bids primarily originated. According to an official, the government has received the most FDI bids from nations sharing a land border with India in three departments: electronics and IT, industry and internal commerce, and heavy industries.

Following the COVID-19 epidemic, the government made prior permission necessary for foreign investments from countries that share a land border with India in April 2020, in order to prevent opportunistic takeovers of local businesses. China, Bangladesh, Pakistan, Bhutan, Nepal, Myanmar, and Afghanistan all have land borders with India. According to that judgement, FDI bids from these nations must be approved by the Indian government before they may invest in India in any industry.

The key industries from which these FDI proposals primarily came were heavy machinery, automobiles, and auto components; computer software and hardware; trade, ecommerce, and light engineering and electrical manufacturing, according to the official. The ministry of new and renewable energy, as well as the department of medicines, have received numerous offers from these nations, according to the source.

Furthermore, the Ministry of Electronics and IT, the Department for Promotion of Industry and Internal Trade (DPIIT), and the Ministry of Heavy Industries had received over 40 outstanding FDI proposals under this decision as of June 15 this year. China and Hong Kong have made the majority of the foreign investment offers. In addition, Nepal, Bhutan, and Bangladesh have also filed applications.

The Department for Promotion of Industry and Internal Trade (DPIIT) issued a press release in April this year saying that a business or person from a nation that shares a land border with India may invest in any industry in India only after receiving government permission.

The government has established an inter-ministerial committee to examine these ideas, they added, adding that the majority of the investments are for brownfield projects (means in existing Indian companies). It has been recommended that all administrative ministries and departments establish specialised FDI cells to expedite the processing of these requests. During the first half of this fiscal year, India got USD 17.6 billion in FDI.