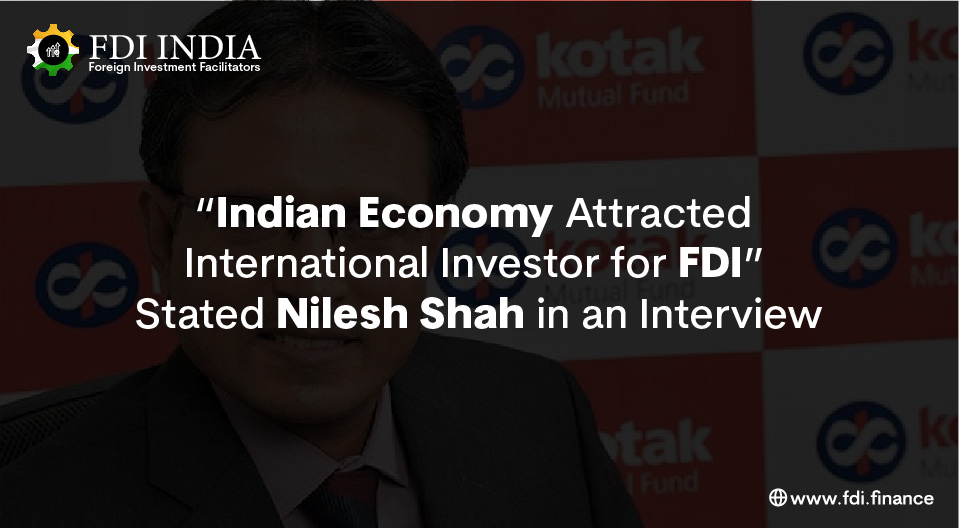 The unprecedented level of Foreign Direct Investment (FDI) in India demonstrates international investors' faith in the Indian economy. In recent years, several firms have moved away from China. Many countries, including India, are trying to take advantage of this opportunity and attract those companies to shift from China. India attracted an FDI of 81 billion USD in the fiscal year 2021. It proves that foreign investors are now keeping their faith in the Indian economy, said Nilesh Shah, Managing Director, Kotak Mahindra Asset Management Company.

Shah explained the reason behind it in an interview and said that out of 81 billion USD, a significant amount of investment was attracted by the digital and start-up economy. Companies are shifting their base from china to India after gaining confidence in the Indian economy. Shah said that for the production linked incentive (PLI) scheme, the Indian government had chosen 13 areas.

Textile up-gradation fund was launched many years ago to give funding to set factories. The aim was to boost production so that India will become the textile hub of the world. The PLI scheme is for output and sectors like electronics, electricals, mobile phones, automobiles, textiles. Samsung has also even shifted its mobile company from China to India.

He also said that in 1980 India and china were equal, but now China is five times more prominent and is known as the world's manufacturing factory. As we lack in manufacturing, we need to bridge this gap. But through the introduction of the PLI scheme, global companies will be brought to India. The motive of the Indian government is to get companies like Samsung in India, and the PLI scheme will help in completing this motto. Also, this will create employment in the manufacturing sector, which will support the domestic and global economy.

He further added, "Vehicle manufacturing began in India when Suzuki arrived, resulting in a modest automobile market. India now exports automobiles and two-wheelers to every country on the planet. If we can attract such firms to the areas targeted for the PLI program, India can become a global manufacturing hub, similar to how we are known as the world's back office in services."