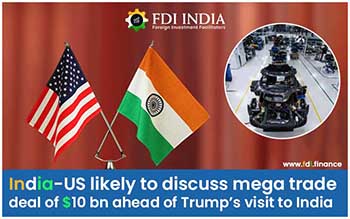 New Delhi: As per recent media reports, India and the United States of America are expected to hold a discussion and subsequently finalise a major trade deal amounting to USD 10 billion in February the visit of Robert Lighthizer, United States Trade Representative (USTR) to the national capital.

Reportedly, the important deal will be signed by both the countries during the visit of the US President Donald Trump to India even as its legal vetting remains pending.

One major hindrance in the finalization of the deal was the restriction on import of medical devices. The deal is said to have been in works for quite a while now with the representatives of the two nations also holding meetings at the World Economic Forum’s Annual Meeting 2020 in Davos. Apart from this, a 6 member team from the United States visited India over the weekend to meet Piyush Goyal, India’s Industry and Commerce Minister.

The trade deal is significant after the ongoing debate over India’s high tariff rates. Last year in May, Trump’s government had eliminated India from the special trade status that had previously aided zero tariffs on USD 5.6 billion exports to the States.

ET reported that Robert Lighthizer may also meet with Goyal during his visit in order to finalize the terms of the deal. It is being speculated that Trump will stay at ITC Maurya in India. The hotel has been booked from 21- 24 Feb.

It is also being reported that the Modi government is likely to organise an event similar to US’ ‘Howdy Modi’ in Ahmedabad.

Additionally, America was willing to sell another USD 5-6 billion worth of farm goods to India with the aim of restoring India’s GSP Privileges. The deal requested India to reduce tariff rates on US farm goods such as walnuts, almonds, and apples. This request was forwarded to India by the US in December 2019.

If finalized, the deal will be a win-win for both countries. It will aide US in countering China’s economic growth, while also helping India to face up to the growing economic slowdown in the country.