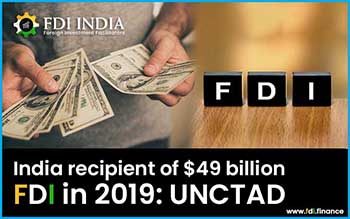 The United Nations Conference on Trade and Development (UNCTAD) on Monday revealed that Indian ranked among the top 10 recipients of foreign direct investment in 2019. The FDI equity inflows for the year 2019 amounted to a total of USD 49 billion, a 16 per cent increase from the inflows of the previous year. The sector that witnessed a majority of the inflows was the services industries, including information technology.

In the Global Investment Trend Monitor, the UNCTAD said that the global foreign direct investment declined in the year 2019 to USD 1.39 trillion as compared to the USD 1.41 trillion from the previous year. The dip was of 1 per cent.

“South Asia recorded a 10% increase in FDI to $60 billion. The growth was driven by India, with a 16% increase in inflows to an estimated $49 billion. The majority went into services industries, including information technology,” it said.

Bangladesh and Pakistan witnessed significant dips in their foreign direct investments with a decline of 6 per cent and 20 per cent to USD 3.4 billion to USD 1.9 billion respectively.

“This is against the backdrop of weaker macroeconomic performance and policy uncertainty for investors, including trade tensions,” it said.

As per the report, foreign direct investment to developing countries remained flat at as estimate total of USD 695 billion.

FDI increased in Latin America and Africa to 16 per cent and 3 per cent respectively.

China was the second largest recipient but saw very little growth from the previous year. FDI equity inflows in China for the year 2018 were USD 139 billion and USD 140 billion in 2019.