FDI India would like to bring to your notice that our authorized official Email IDs are [email protected], [email protected], india[email protected], and Contact Numbers 0120-7195400, 9560023760, and 8882033433. FDI India shall not be liable for any claims, damage, or loss of any kind inflicted by any other unauthorized entity. Be very mindful of such scams.
Legal : We own all the information, images, text, logo, and other content provided by us. The use of information is strictly prohibited without our consent. We hold the right to take a legal action against any individual or organization violating or using our site information.
Become A Partner 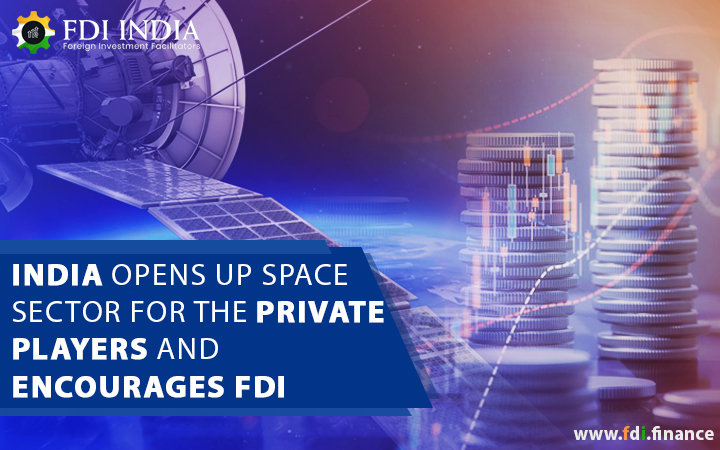 India is all set to open up the space sector and also encourage foreign direct investment. It would also mean that foreign companies are all geared up to set up the facilities in the country.

"We are going on full steam now. Foreign firms can set up facilities to make satellites and launch vehicles here, set up ground stations and use our spaceports as long as they invest here through FDI,” K Sivan, secretary, DoS.

"While policies will enable this, decisions will be taken on a case-by-case basis, given how sensitive the space sector is. National security and interest will be priority, and firms will be required to give undertakings on following all guidelines we lay down,” he added.

On the partnership front with the foreign satellite companies, Sivan said Indian companies can very well tie up with some excellent and performing foreign firms. “For instance, our (Indian) firms can have 60% investment and foreign firms can invest 40% through FDI. But the modalities need to be worked out,” Sivan said.

While expressing that the division would give greater clearness once IN-SPACe (Indian National Space Promotion and Authorisation Center) is totally operational and different arrangements in the pipeline are fit to be turned out, Sivan said numerous organizations have indicated enthusiasm for the area.

Indeed, the recently framed IN-SPACe is now exploring different applications, including one each from UK-based OneWeb, a stake wherein is possessed by Bharti Enterprises, and Norway-settled KSAT, a worldwide media communications specialist co-op.

Sivan said Airtel had sought the department’s support in establishing ground stations. “We are reviewing this and there are many more applications that have been received. One major foreign firm is KSAT from Norway, which as part of its worldwide network, wants to set up ground stations in India,” he said.

As reported by TOI, industrialist Sunil Bharti Mittal had in August said the firm was keen on partnering with Isro to leverage OneWeb’s constellation.

“OneWeb will have the world’s first large constellation in LEO (low Earth orbit). We will have 648 satellites covering the world, and testing will begin next year. We desire to get landing rights (permission to use satellites in India) here and we’ve identified areas in north, south and west for ground stations to start delivering services when constellation is complete,” Mittal said.