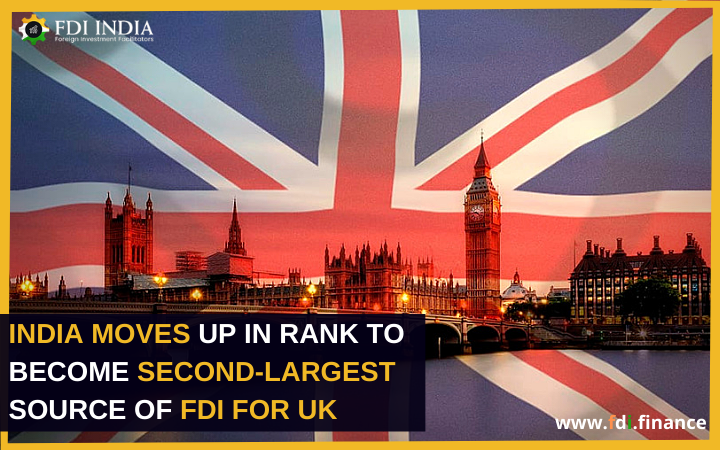 India holds its investment in about 120 projects and has managed to create 5,429 new jobs in the UK. This makes India the second-largest source of foreign direct investment (FDI) after the US in 2019, according to the new government figures released by UK on Friday.

The Department for International Trade (DIT) inward investment statistics for 2019-2020 clearly stated that India is moving up from its previously third-largest spot. It is a clear indication that overall 4 per cent of FDI increase for the UK on 2018-2019 with 1,852 new inward investment projects in the 2019/2020 financial year.

The US still ranks as a number one source of FDI for the UK. It delivers about 462 projects and has been a source of 20,131 jobs, followed by India, Germany, France and China and Hong Kong. The number of Indian projects has been the reason for raise in the job creation figure from 4,858 last year to 5,429 jobs for this year.

“During the COVID-19 crisis, we have been working with India to keep supply chains open and keeping trading routes alive and as we emerge from COVID, it is vitally important we don’t move to protectionism,” said that the UK International Trade Secretary Liz Truss, addressing the annual India Global Week 2020 virtual summit on Friday.

“On the trade side, we are not letting the grass grow under our feet and the UK and India are carrying on negotiations virtually given the current crisis,” she said, in reference to a planned virtual India-UK Joint Economic and Trade Committee (JETCO) summit this year.

The latest FDI figures of UK show that while the number of new jobs might have declined – a global trend related to the FDI reports this year suggested that the number of jobs safeguarded by FDI increased by about 29 per cent.

“These figures further demonstrate the resilience of the UK economy and the work of the government to continue to build and attract inward investment into the UK.

Developing key sectors such as advanced manufacturing, life sciences and renewable energy will help us to rebound post-pandemic and build on our attractive business environment across the UK for investors around the globe,” added Truss.