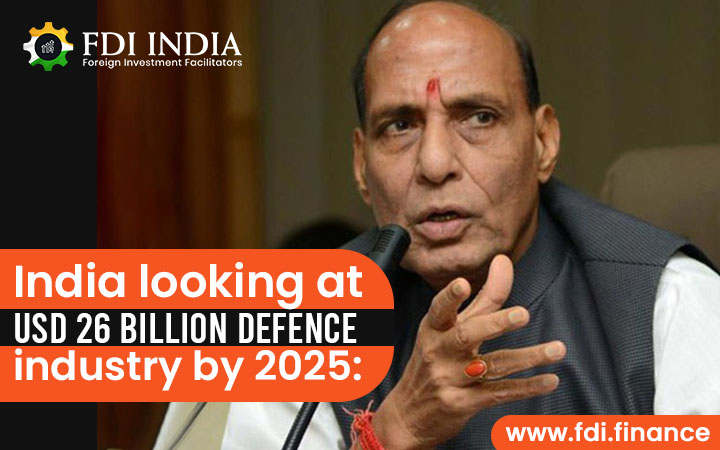 Recently, while addressing a business seminar called ‘India Rising’, Defence Minister Rajnath Singh said that India was looking at achieving USD 26 billion by the year 2025. The business seminar was organised by the Indian Chamber of Commerce at the Defence & Security Exhibition 2019.

At the conference, he was seen encouraging manufacturing companies to join the ‘Make in India’ initiative.

Admitting that the quoted figure was ambitious Singh said, "On the one hand this target is ambitious, but at the same time it's encouraging that India's defence exports have grown almost six-fold in the last two years.” Under the Draft Defence Production Policy 2018, the government of India sought $5 billion defence exports by the year 2025.

The defence minister said that USD 10 billion investment in the aerospace and defence goods and services could lead to significant employment generation, creating jobs for 2-3 million people. This figure was expected by 2025.

Rajnath Singh also said, "A new transfer of technology (ToT) policy is being developed to simplify the way of transferring technology by DRDO to the industry. More than 900 ToT licensing agreements have been signed with industries. It's a major step towards making the defence manufacturing sector self-sufficient.”

Recently, the government introduced a number of reforms in the FDI reforms of different sectors such as digital media, single brand retail trade, coal mining, contract manufacturing and more. These reforms were originally proposed for the first time by finance minister Nirmala Sitharaman in her maiden budget of 2019.

These reforms came after the country witnessed a dip in FDI equity inflows for the first time in 6 years. Changes were proposed in the existing FDI regulation structure in order to attract more overseas investors.