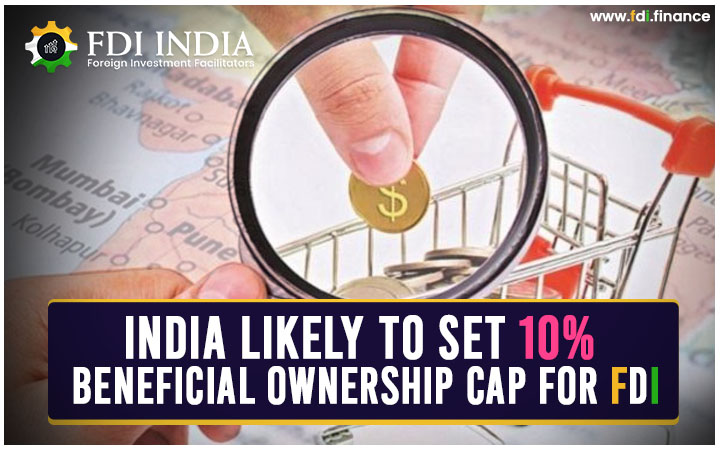 In a new move, the Indian government may set a beneficial ownership threshold for foreign direct investment (FDI), above which a government approval will be required for investments flowing from seven bordering countries including China.

This limit is likely to be out in place to ensure that small or indirect investments by big-ticket venture capital and private equity firms from these countries do not get delayed due to clearance processes.

The government may set a 10 per cent threshold aligned with  the rules for significant beneficial owners (SBOs) under the Companies Act, 2013. According to the companies act, a significant beneficial owner is someone who holds indirectly, or together with any direct holding, not less than 10 per cent of the shares or voting rights in shares or has a right to exercise significant influence or control in any manner other than direct holding alone.

“The way regulations are currently worded, beneficial ownership of even a minuscule percentage, even without control, will entail government approval. This does not seem to be the intention,” said an expert with a consultancy firm, who did wish to be identified, reported ET.

According to the expert, this can impact M&A from other countries, too, especially private equity investments, as many global companies/funds may have some Chinese or Hong Kong investors. “It is, therefore, important to clarify beneficial ownership,” the expert said.

Last month, the government tweaked its foreign direct investment policy and announced that prior government approval was mandatory for investments coming in from countries sharing a a border with India, including China.

China was nor welcoming of the move and labelled it “discriminatory”, even as Indian officials explained that the step was to ward off “opportunistic” takeover of Indian companies by Chinese companie.