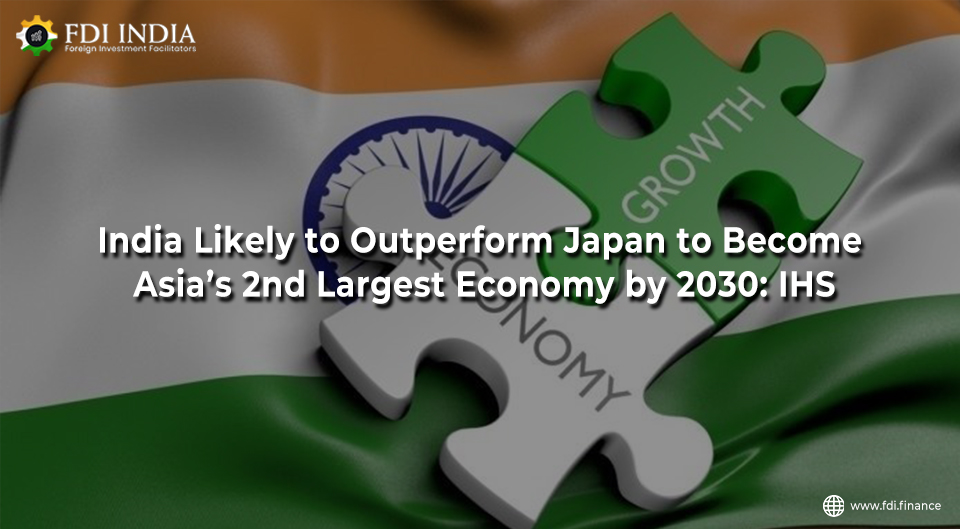 In a report, IHS Markit, a global leader in information and analytics, said that India’s economy is likely to overtake that of Japan by the year 2030 to become the 2nd largest economy in Asia.

“India's nominal GDP measured in USD terms is forecast to rise from $2.7 trillion in 2021 to $8.4 trillion by 2030. This rapid pace of economic expansion would result in the size of Indian GDP exceeding Japanese GDP by 2030, making India the second-largest economy in the Asia-Pacific region,” the report stated.

Going at the current pace, IHS Markit has speculated that the Indian economy will eclipse the European economies of Germany, France, and the UK to become the world’s 3rd largest economy by 2030, only behind the US and China.

“The large increase in FDI inflows to India that has been evident over the past five years is also continuing with strong momentum in 2020 and 2021,” it said.

The forecast has been made on the rapid growth trends in the domestic consumer market and the industrial segment, making India a favorite investment destination for multinational companies in leading sectors such as infrastructure, manufacturing, and services.

“An important positive factor for India is its large and fast-growing middle class, which is helping to drive consumer spending,” said IHS Markit. The report mentioned that the country’s consumption is expected to double to $3 trillion by 2030 from its current level of $1.5 trillion.

The digital transformation that India is undergoing through the expansion of e-commerce and the increased adoption of 4G and 5G telecom technologies in the future will further spur India’s economic growth.

This digital shift will augment the market presence of domestic unicorn startups like Delhivery (logistics), Mensa Brands (e-commerce), and BigBasket (online grocery), whose sales flourished during the COVID-19 pandemic.

“By 2030, 1.1 billion Indians will have internet access, more than doubling from the estimated 500 million internet users in 2020,” the report further added.