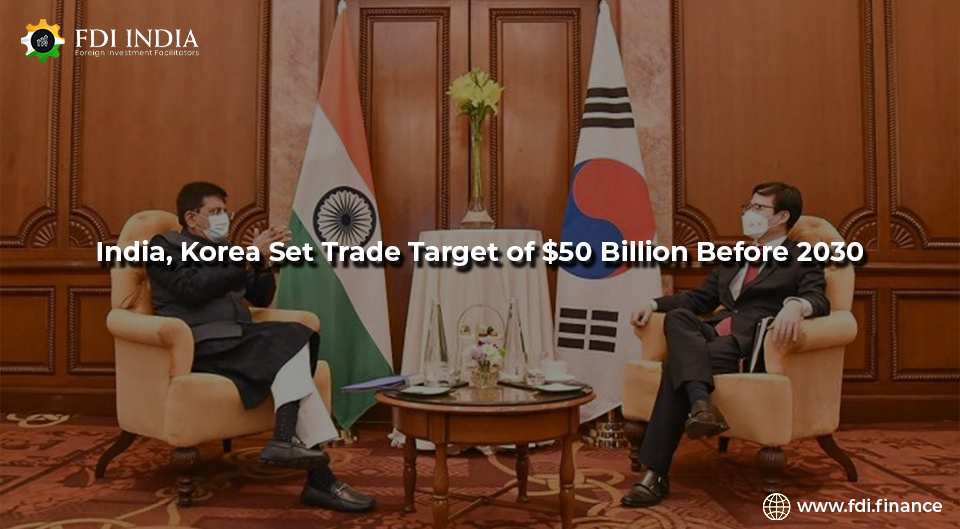 India’s Commerce and Industry Minister Piyush Goyal and the Republic of Korea’s Minister for Trade Yeo Han-Koo have agreed upon upgrading the Comprehensive Economic Partnership Agreement (CEPA) to achieve bilateral trade worth $50 billion before 2030.

The two dignitaries discussed forming a conducive business environment for fair and balanced bilateral trade, which will mutually benefit both sides.

Trade between the two countries was recorded at $10.97 billion between Jan 2021 and June 2021, which was 38% higher than the corresponding period’s trade in the previous year.

The Korean minister, who is on an official Indian visit after being invited by his Indian counterpart, directed the negotiation groups to meet regularly in order to wrap up the CEPA upgradation negotiations as soon as possible.

The process will be time-bound, with continuous support and discussions with the relevant stakeholders to achieve the set target of $50 billion in trade by 2030, as was agreed upon by the two nations in 2018.

As per a report by Dezan Shira & Associates, published in December 2021, South Korea is India’s 13th largest foreign direct investment (FDI) source. The country has invested close to $4.97 billion between April 2000 and June 2021.

The major companies that contributed to the foreign investment include Tata Daewoo, Ssangyong, and Novelis.

The bilateral relations between India and South Korea have enhanced significantly in recent years due to greater cooperation in sectors such as energy, electronics, information technology, shipbuilding, and cybersecurity.

According to the Ministry of External Affairs (MEA), economic trade and relations have witnessed a boost after the implementation of CEPA in 2010. In fact, from 2017 to 2019, the bilateral trade volume has constantly stayed above $20 billion.