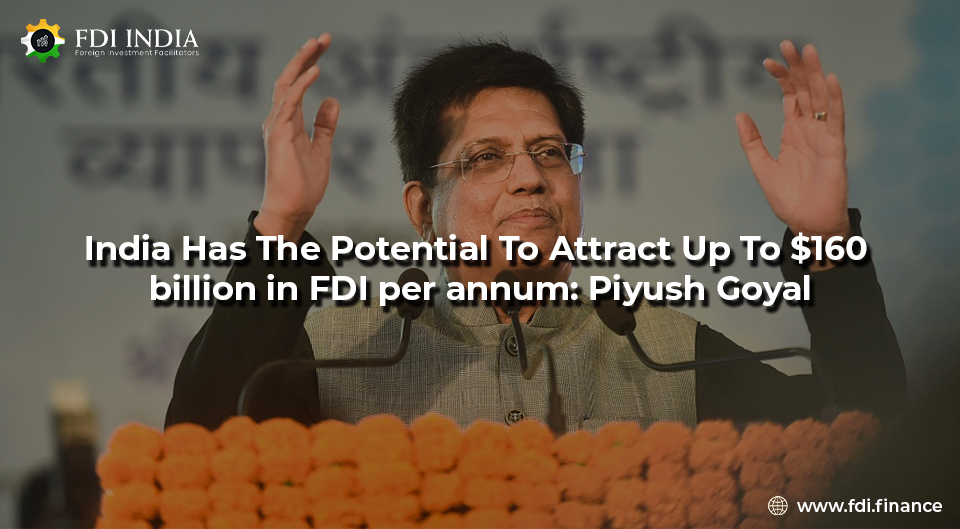 Union Commerce and Industry Minister Piyush Goyal has said that India could become the next epicenter of global investment with the capability to attract foreign direct investment up to $120-$160 billion by 2025.

“We have the potential to attract an annual FDI in the range of $120-$160 billion by 2025. We’ve seen record FDI inflows, breaking the previous year’s record each year, seven times in a row. And I hope to see this continue triggered by major structural reforms. The fact that we have a proactive leader in Prime Minister Modi, willing to listen and change in these dynamic times,” he said, speaking at the 2nd edition of the CII National Conference on MNCs, 2021.

He referred to the various reforms initiated by the Modi government and the withdrawal of the retrospective tax as the primary reasons for the expected FDI inflow.

“There are more success stories here than anywhere in the world today. Today we have 71 unicorns. Our manufacturing PMI is high and services PMI has reached a decade high,” he said.

Goyal also added that global sentiments have converted from ‘Why India?’ to ‘Why Not India!’, and now to ‘We must be in India!’

Speaking on Free Trade Agreements (FTAs), he said a committee has been set up to work out an FTA with the six nations of the Gulf Cooperation Council (GCC) as a group.

An FTA consists of the two trade partners liberalizing norms and reducing or eliminating customs duties on the maximum number of traded goods, to enhance trade and further incentivize investments.

Negotiations regarding FTAs are also underway with several other countries such as Australia, UK, Israel, European Union (EU), and UAE.

“We will have an FTA with UAE in the next 60-100 days, an interim agreement with Australia probably around the same time. With the EU, work should start soon. They have recently appointed a lead negotiator. We are working on starting with Canada and preliminary discussions are underway,” he said.

The minister urged MNCs to utilize India as a manufacturing base to capture the world.

“Hope you continue to grow, acquire new businesses, recruit in India and bring international talent here,” he further said. He stressed that on the single window clearance platform, more states would participate.